A LOOK INSIDE SHAMAN KANE BOOK 1. 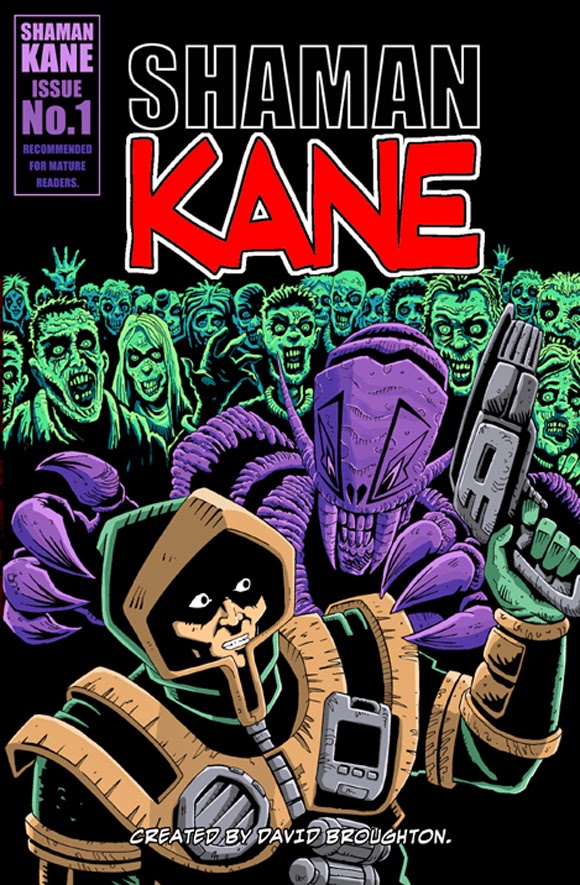 Above: The finished cover for Shaman Kane book 1.

Introduction:
I'm hoping to lauch Shaman Kane Book 2 at the Cardiff one day Expo on June 27th 2015. So before I start with the teaser pictures and posts for Book 2,  I want to explore Shaman Kane Book 1 in a little more depth.

Where did Shaman Kane come from?
I had the idea for Shaman Kane around 2011.  I wanted to create a supernatural creature hunter set in the future. So I started doodling. 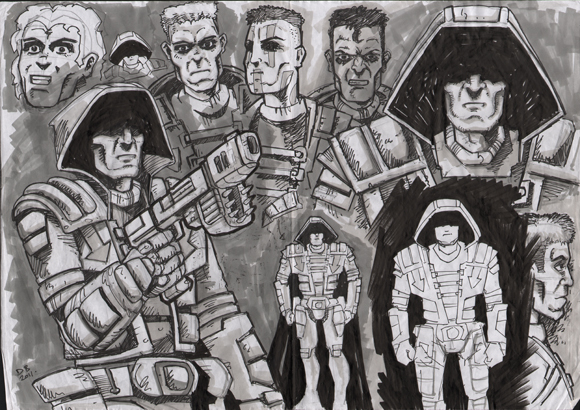 Above: The first rough character sketches for Shaman Kane 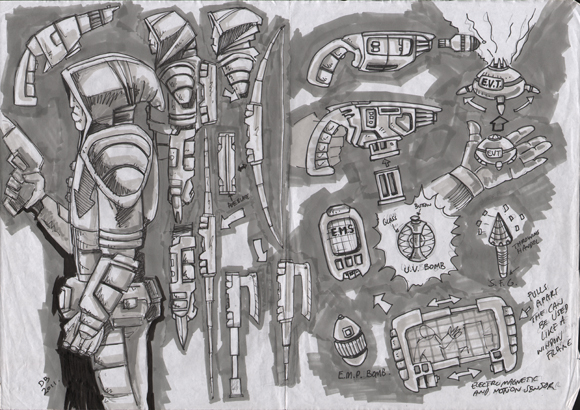 Above: First rough sketches of Kanes costume and equipment. 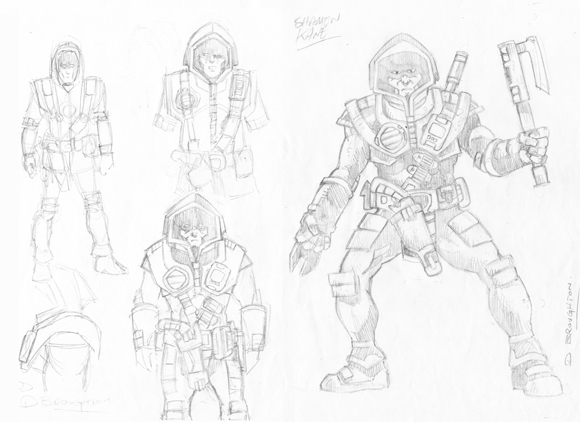 Above: More rough sketches of Kane's costume and equipment. 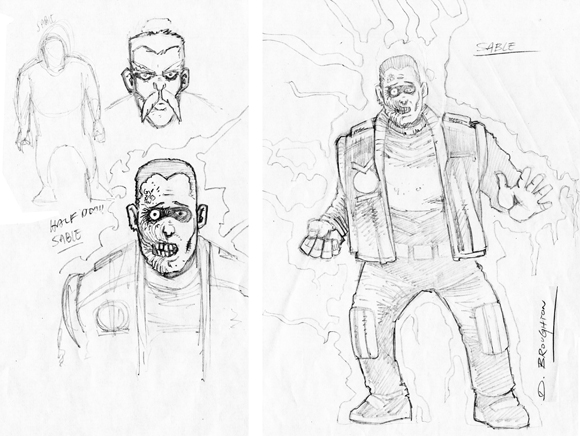 Above: Sketches of the ghost Sable.

Creating the cover artwork.
The next few images illustrate the process I used to create the cover. 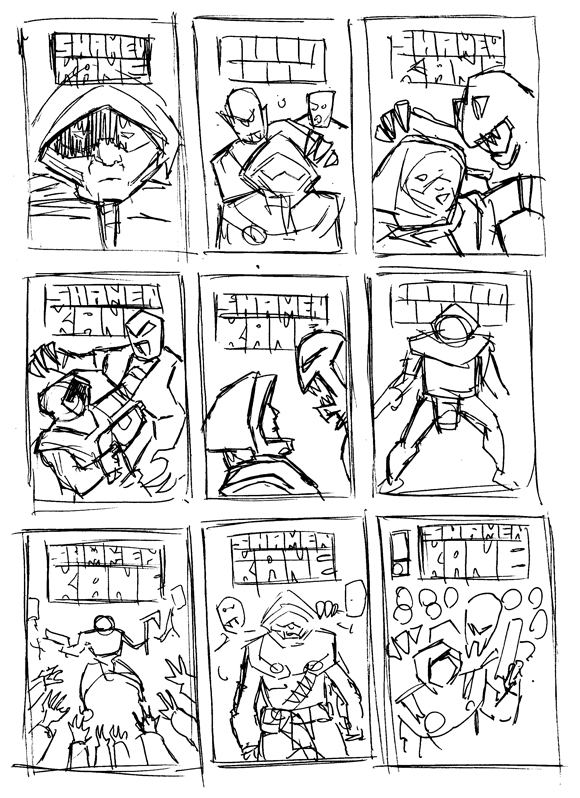 Above: A series of thumbnail sketches showing different cover layouts. 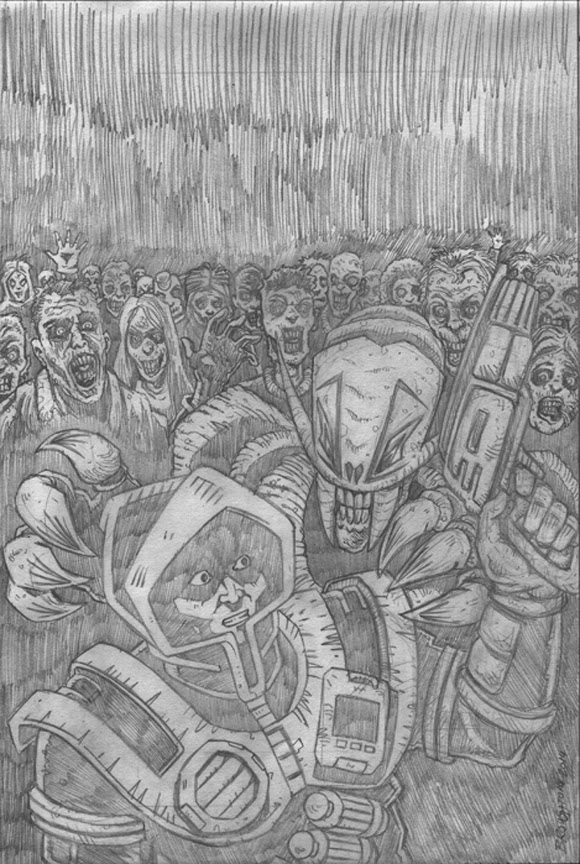 Above: Then after choosing a layout from the thumbnails I pencilled the finish artwork. 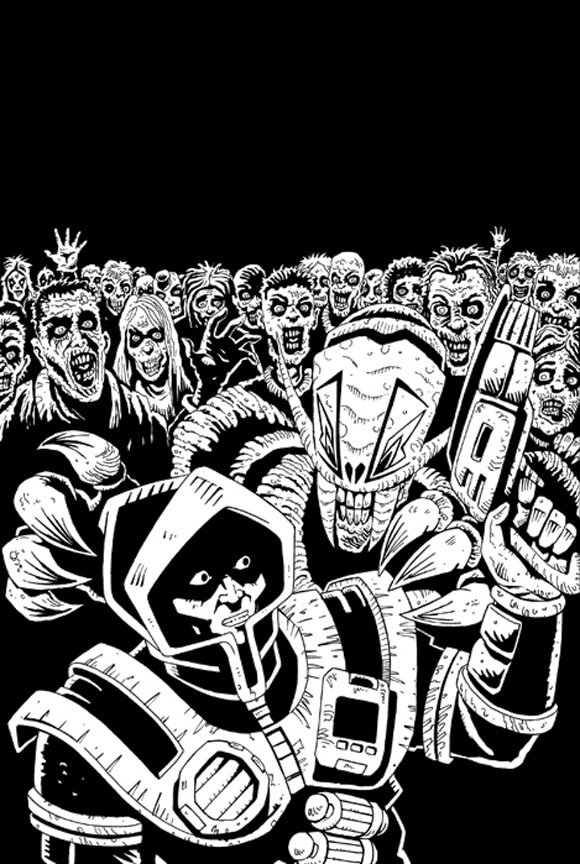 Above: After pencilling I inked the artwork using Rotring tikky graphic pens. I blocked the large black areas using Rotring ink and brushes. 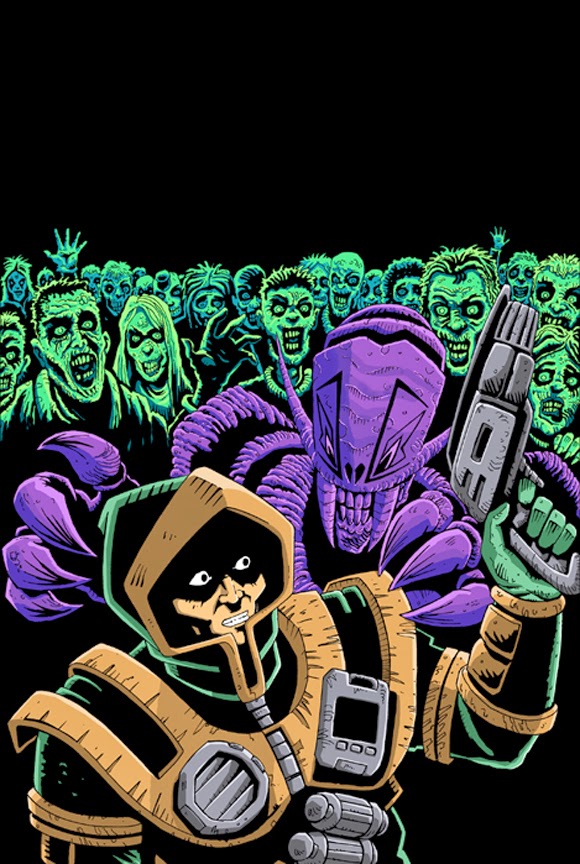 Above: After scanning the inks I coloured the image digitally.

Story One: Poltergeist problems.
I wanted to have the comic book ready for the Bristol convention in May 2014. I scripted story one 'Poltergeist problems' late December 2013 and finished the artwork with lettering end of January 2014. I set straight to work on Scripting Story 2. I also had to complete a Duhram Red script for the 2000AD fanzine Dogbreath for Editor Dave Evans. Dave had contacted me on the 14th of January asking me if I could produce finished art work for the six page script in 3 weeks.  I provided it for him in 2 weeks mainly so that I could meet my target deadlines for the Bristol comic convention. 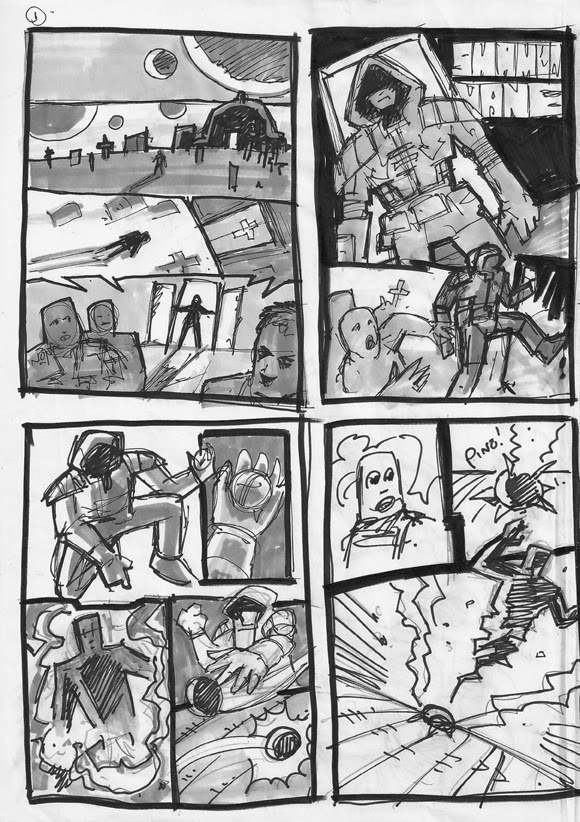 Above: Some rough page layouts for Poltergeist problems. 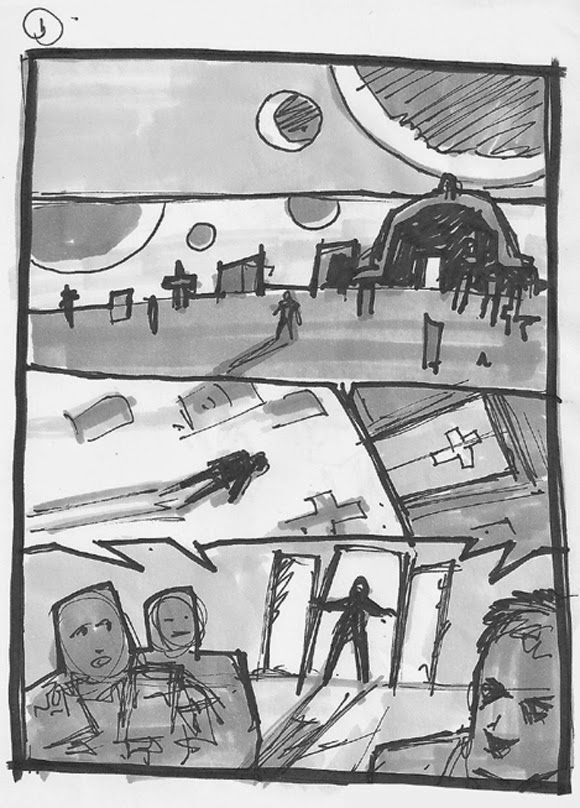 Above: A better look at the rough page layout for page 1. 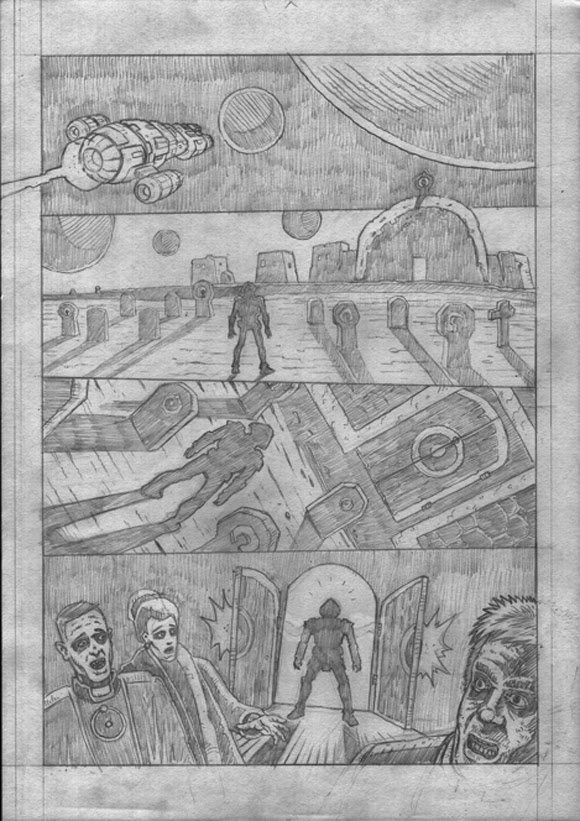 Above: Using the page layout as a guide I created the finished pencils for page 1. 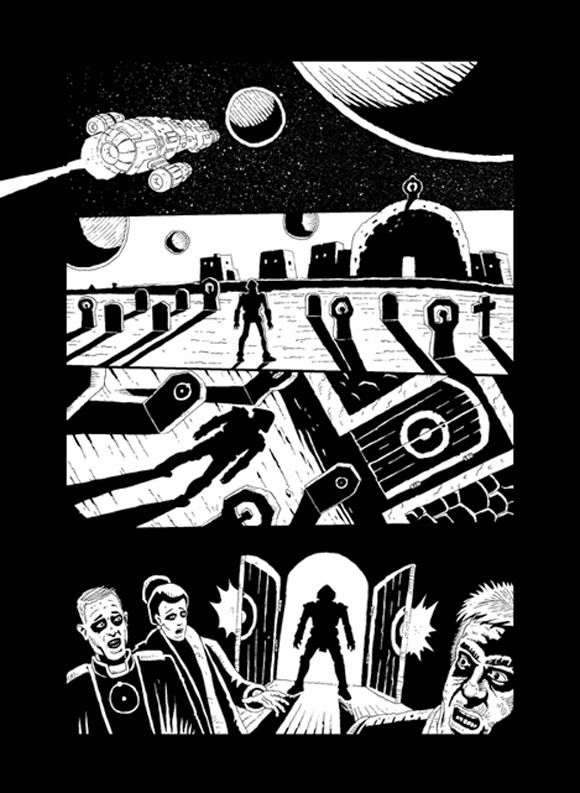 Story two: Sables story.
I started Shaman Kane story two 'Sables story'  at the beginning of february and finished the fully coloured and lettered artwork towards the end of Feb.  However I didn't have a script for story 3 yet and I needed to go to the printers in the first two weeks of April to have a chance of being ready for the convention in May. 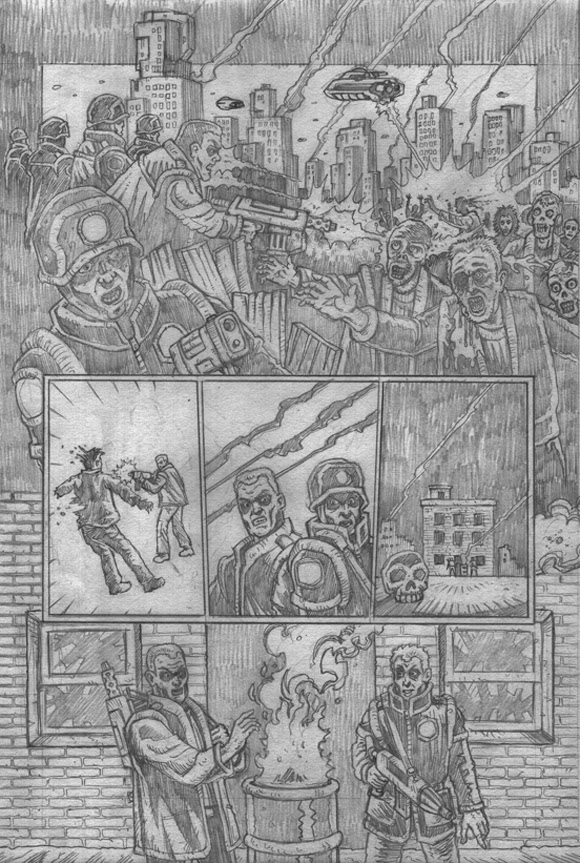 Above: Finished pencils for page two of Sables story. 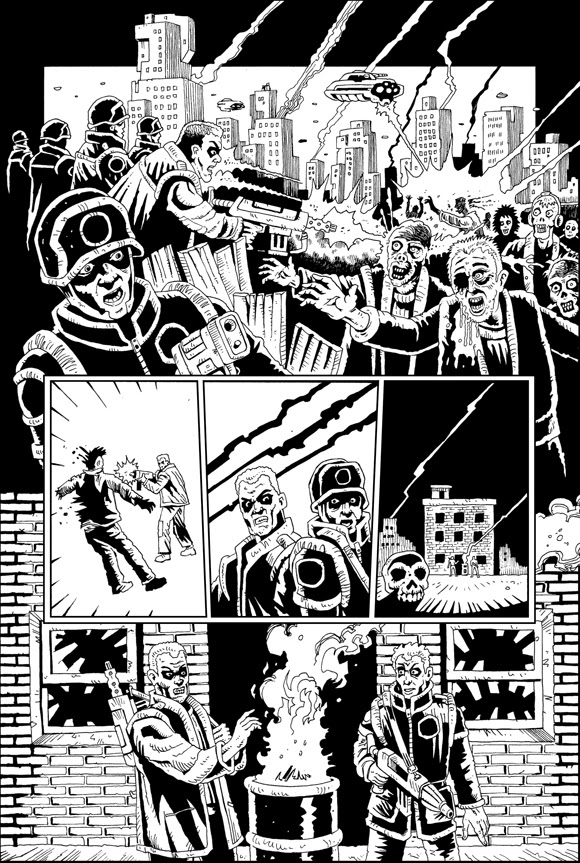 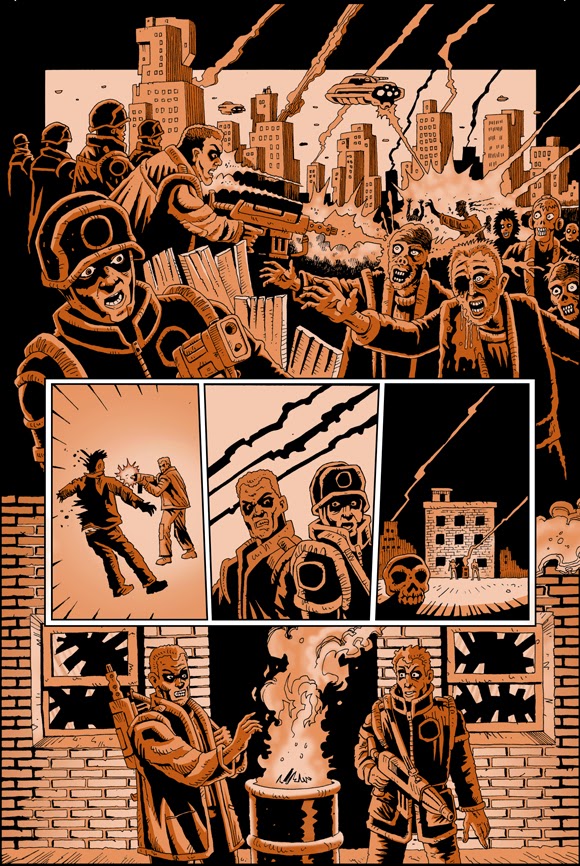 Above: I coloured the image digitally. 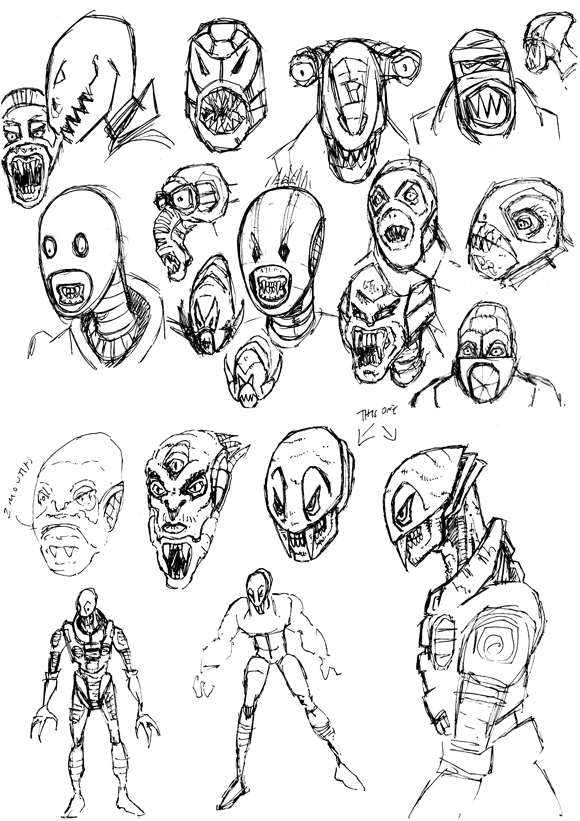 Above: Rough thumbnail sketches and designs for the vampire in Sables story.

Story Three: The ship who screamed.
With no script for story three I was behind schedule.  If I was going make my deadline and get the book ready for Bristol, I was going to have to work harder.  I doubled my efforts. Writing a script, then re-writing it and creating page layouts took roughly a week. I drew for 12 hours a day on the weekends and in the evenings during the week I started at 7pm and finished at 12 most nights.
I finished the fully lettered artwork for story 3 'The ship who screamed' mid way through the first week of April. I was exhausted, but I still had to produce the artwork for the four cover pages.

Incidentally the title for story 3 and the name of the starliner in the story was my salute to science fiction author Anne McCaffrey's 1969 novel 'The ship who sang'. 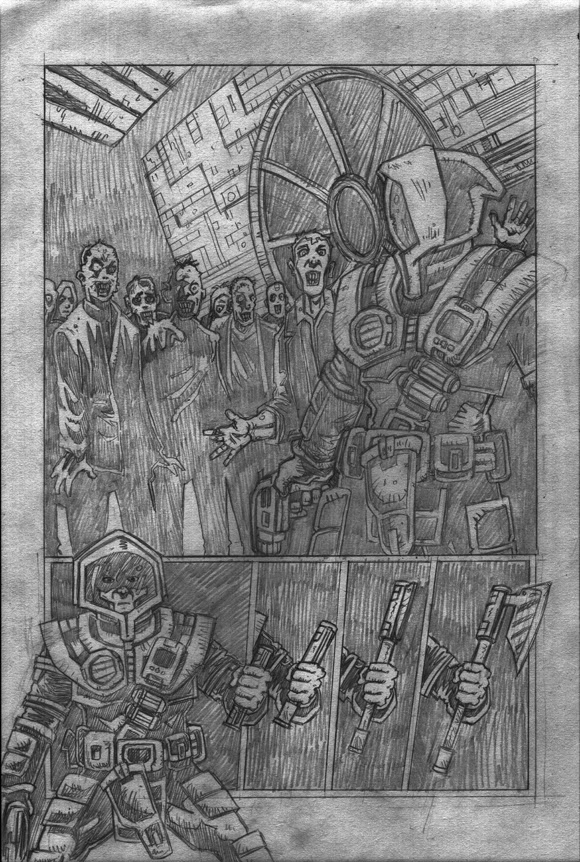 Above: Finished pencil artwork. I detail Kane's Melee. Morph. Unit. weapon on this page
by drawing a sequence of images showing the M.M.U. morphing into an axe. 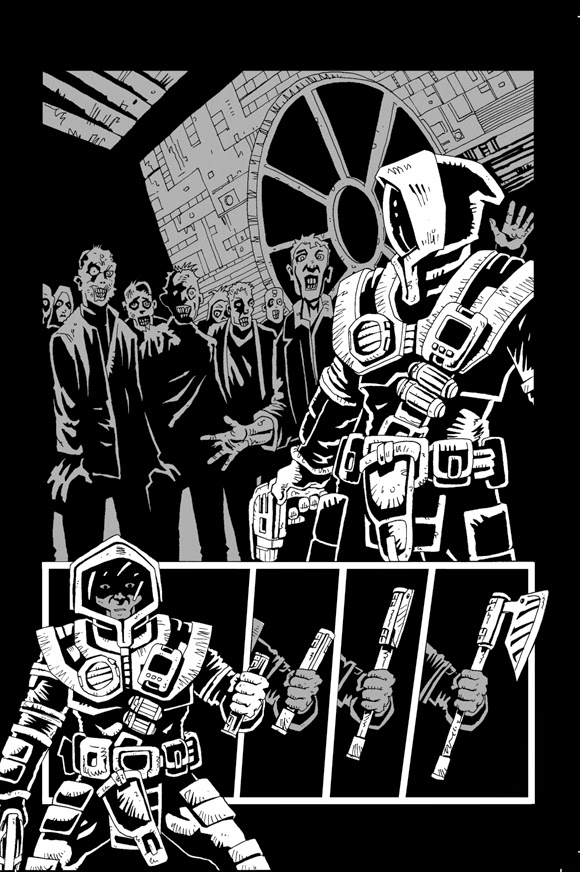 Conclusion:
I managed to finish all the cover artwork and send it all to the printers with about three or four weeks to spare. The printers http://www.ukcomicscreative.co.uk/ did a fantastic job. Thanks to Stuart & Hal.

Shaman Kane Book 2.
For those interested Keep an eye open for Book 2 teasers starting in the next few weeks. 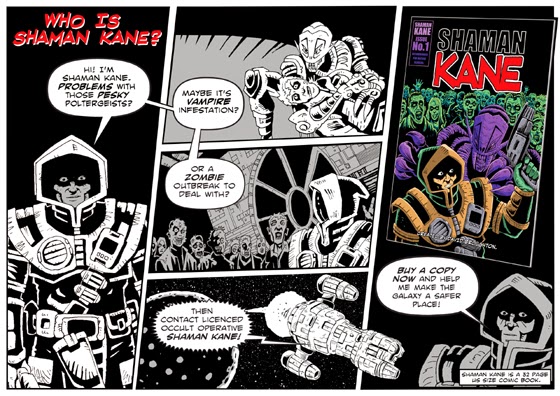