THE V.C.'s RAID ON CALIBAN 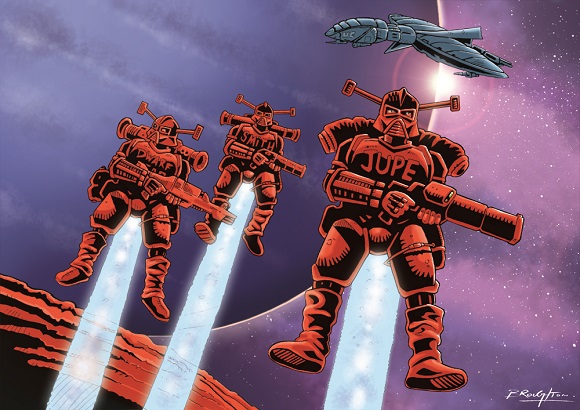 Above: I post my art about Star ship Troopers, Sgt Jupe, Dwarf & Smith in Hyper space!
The above sentence should be sung to  https://www.youtube.com/watch?v=SFnM8jNfAew

Introduction:
Dave Evan's editor of the 2000AD fanzine Zarjaz contacted me on 16/03/16 with a script by Matt Sharp featuring one of my all time favourite 2000AD future war stories 'The V.C.'s. Originally commissioned by 2000AD editor Steve McManus and created by Gerry Finley-Day & Mike McMahon. As a big fan or the original series accepting the script was a no-brainer.

The Script:
DB: Here is a word from the prolific and very knowledgeable regarding all things 2000AD, script witer Matt Sharp.

MS: Whilst he was working on the artwork for ABC Warriors: The Final Battle (which appeared in the Zarjaz Summer Special 2016 – buy it today!) ace artist David Broughton mentioned that he’d always wanted to draw a script for the epic space opera story, The VCs, which appeared in 2000 AD from prog 140 – 175, way back in 1979, which involved ‘zero gravity combat and a space battle’.

I quickly formulated an idea of the crew of the VCs’ ship joining in with a commando raid on a Geek base somewhere near Uranus (the only planet in the Solar System that isn’t actually mentioned during the original run of the VCs), formulating an idea of Smith being thrilled to be ‘volunteered’ to join with a squad of ‘Rat Pack from Battle’ style misfits from an Earth colony on the moon of Miranda to take out a gravity generator station of one of Uranus’ moons, only to discover he’s only along to act as a rearguard and sentry. The commandoes would succeed in their mission, but none of them would get back alive, and the final scene would be Smith witnessing an epic battle scene between the Earth and Geek fleets as the VCs ship battles with a fighter group. I then set about coming up with a first draft, which was eight pages long.

However, David has also asked that I made the script ‘less complicated than the ABC Warriors one!’ which I admit had run away with me somewhat, so I thought it through again, deleting eleven speaking characters and two space fleets from the first draft. The script was now a more manageable four pages long, and can be read here http://www.futurequake.co.uk/submissions if you want to read a script rather than a comic, you weirdo.

Rereading the original progs, I found that there was quite a lot of background material featured that never made it into the story, such as the amazing looking Proto-geek that appears in Starlord’s Guide to the Galaxy, as well as a few things that are mentioned in the strip itself but are never actually used, such as the Land Torpedo. I decided to incorporate these into the script. While trying to determine what sound a Blitz Cannon made when it was fired, I realised for the first time that there were no sound effects in space in The VCs (apart from a few spaceship explosions) – which is a very nice touch, even though it took me decades to notice! 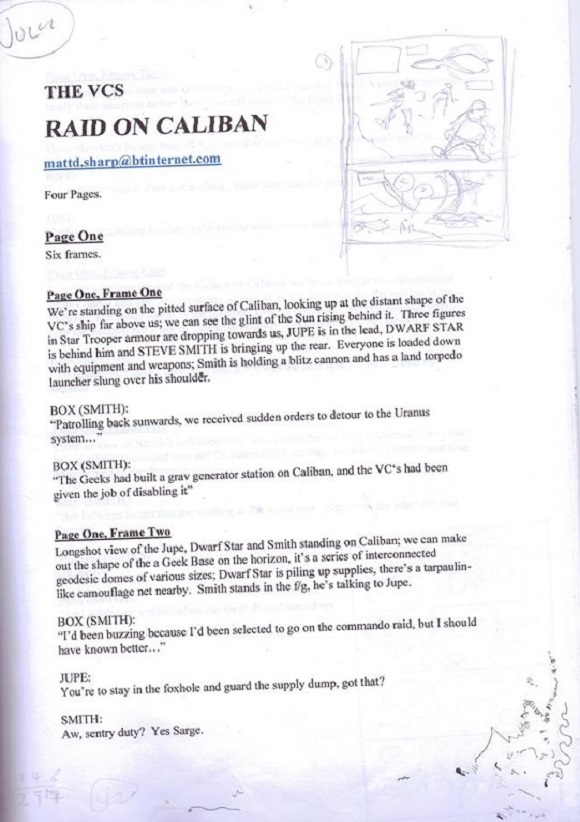 Above: On the second reading of the scripts I some times draw little thumbnail sketches next to the panel descriptions while the ideas are fresh in my head. 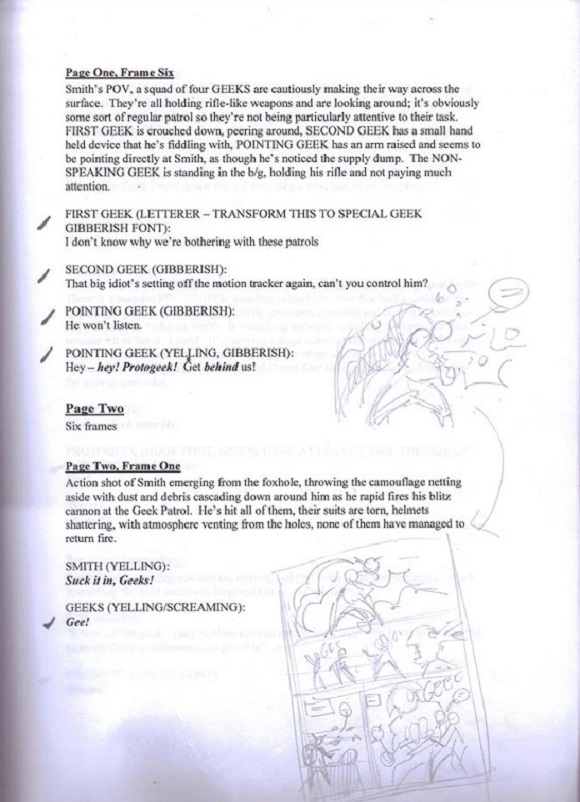 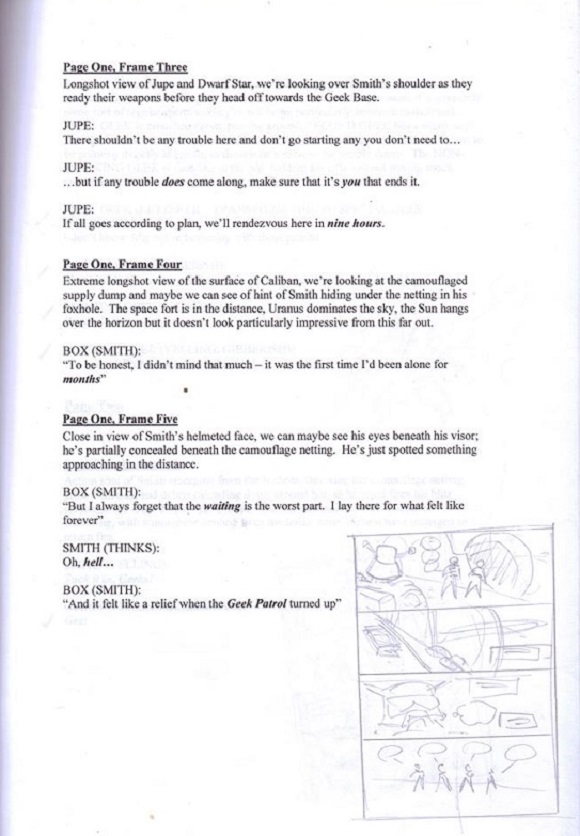 Above: Rough layout for page two scribbled on to Matt's Script page. 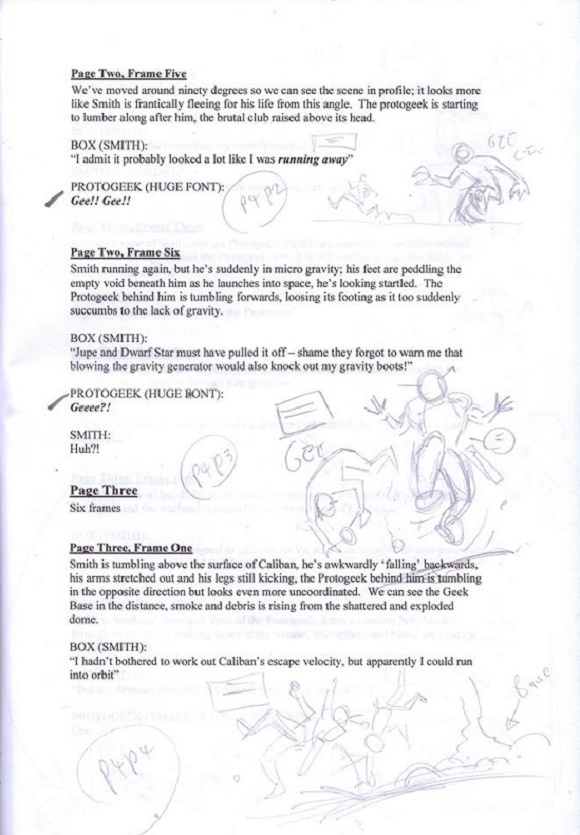 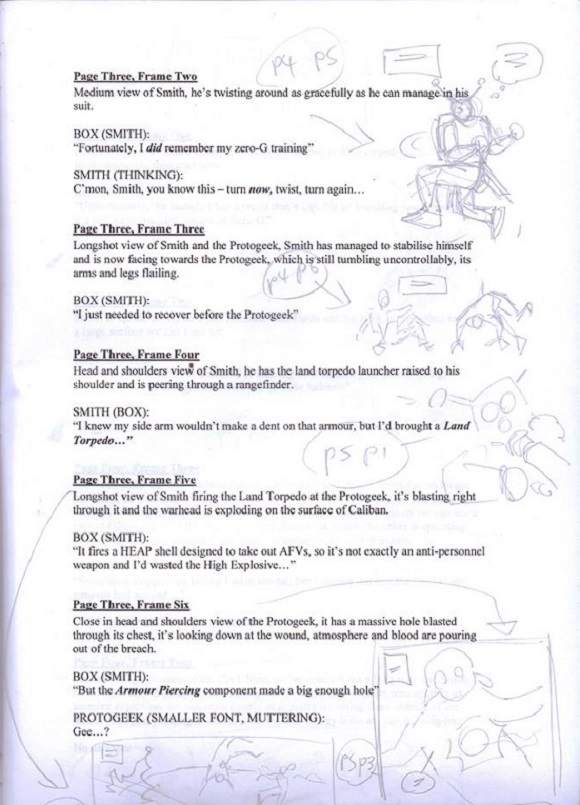 Above: Thumbnail sketches for various panels on page five. 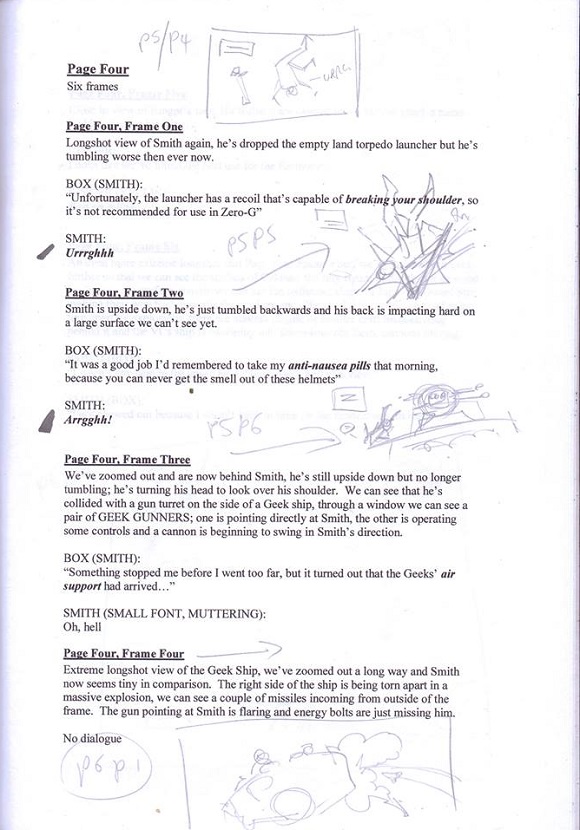 Above: Thumbnail sketches for various panels on pages five and six. 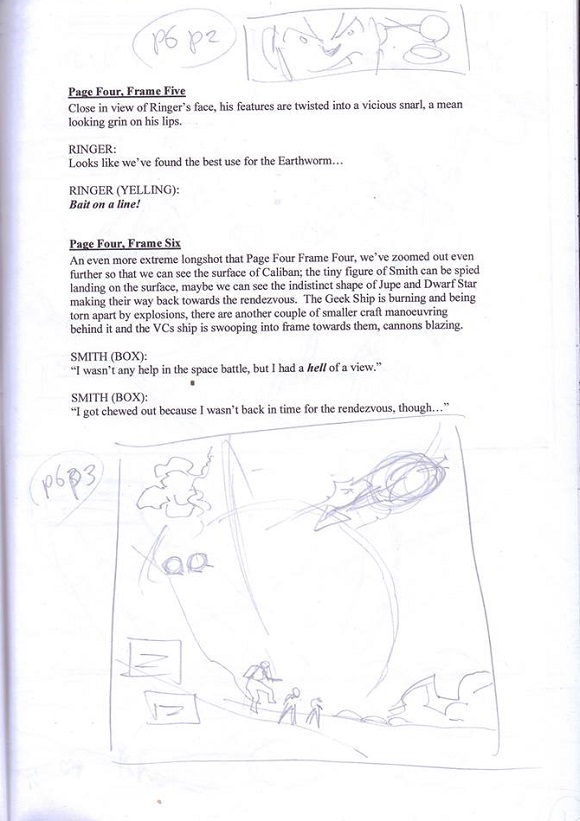 Above: Thumbnail sketches for various panels on page six. 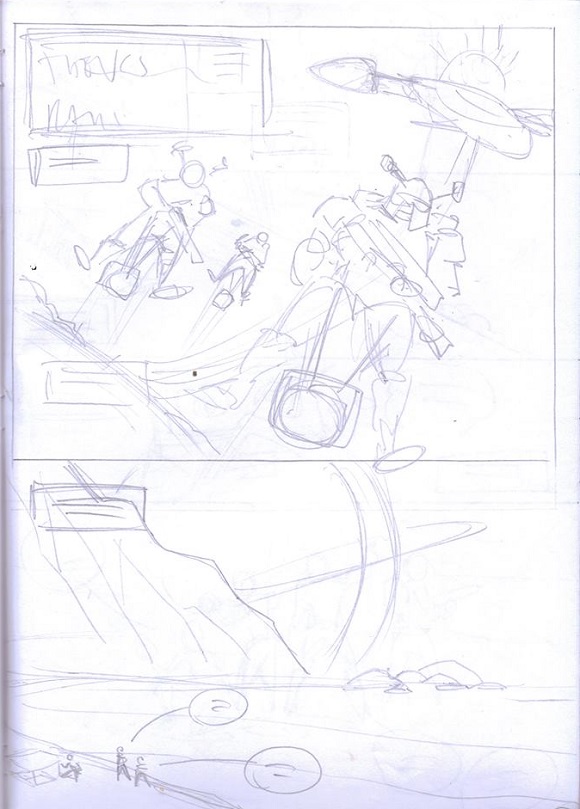 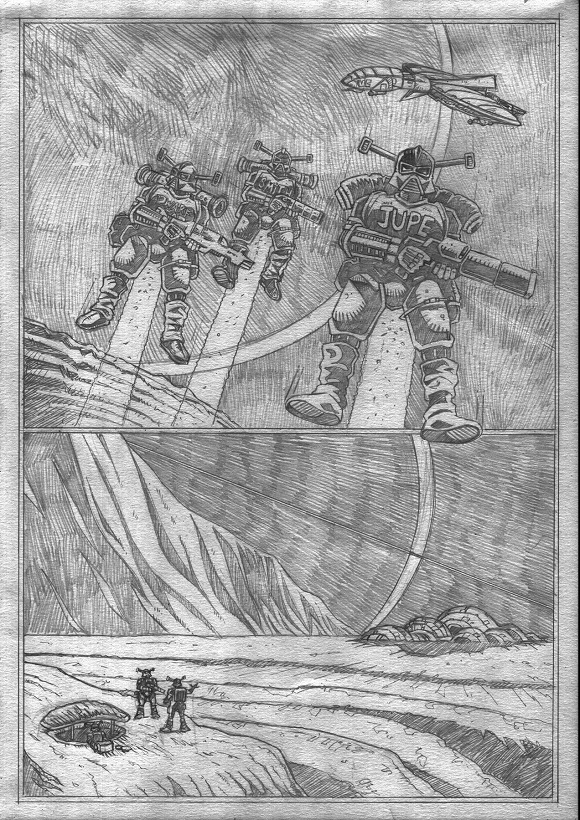 Above: Finished pencils for page one. 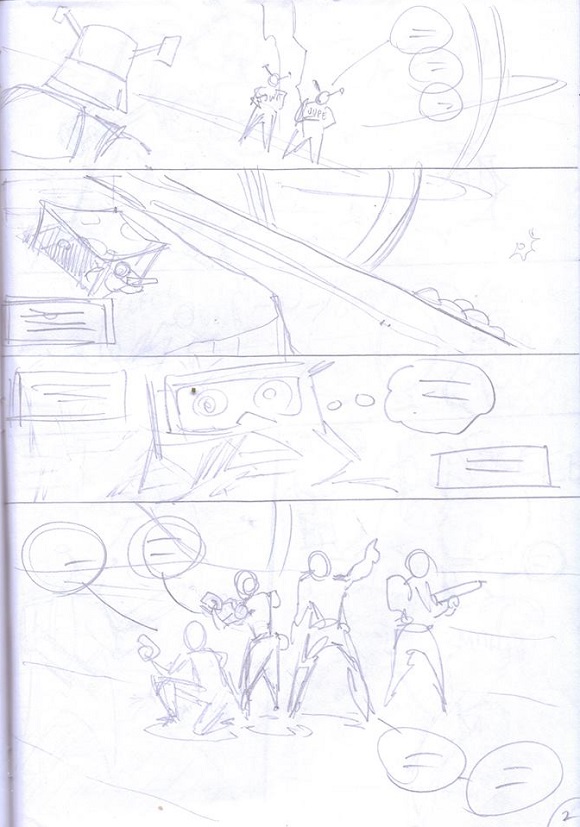 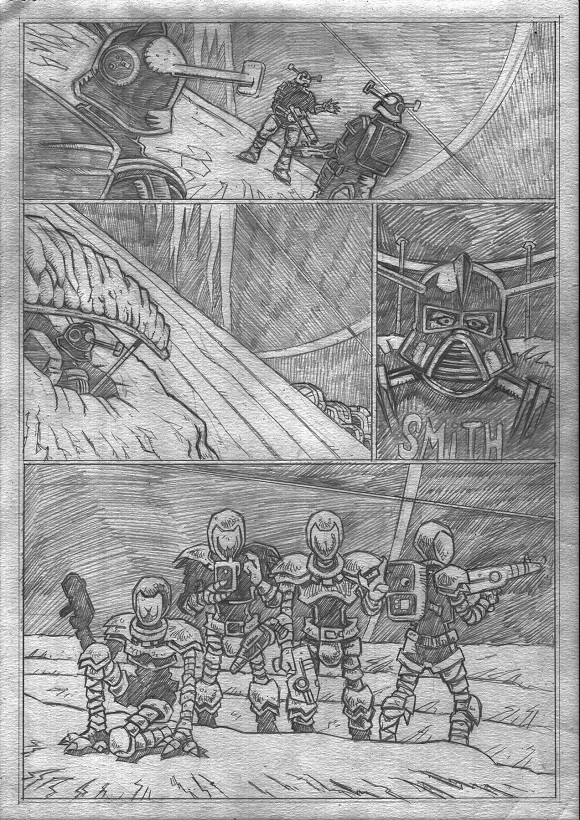 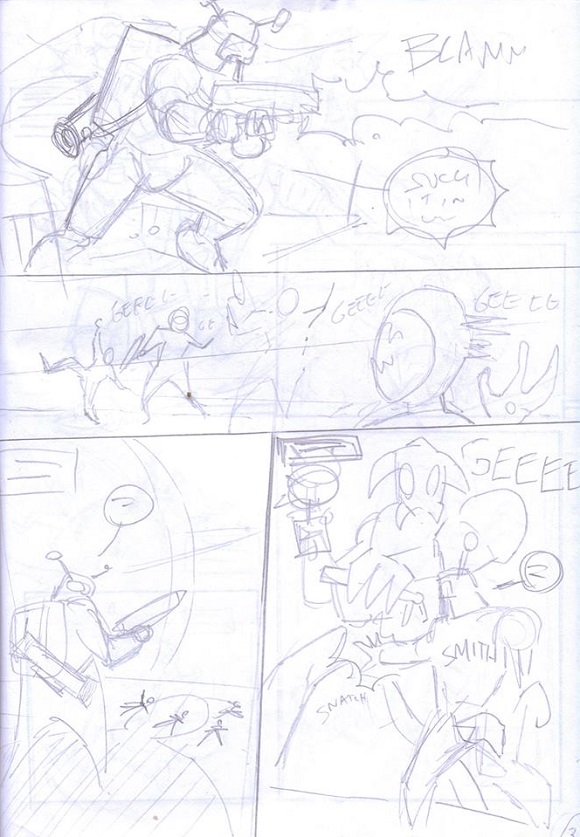 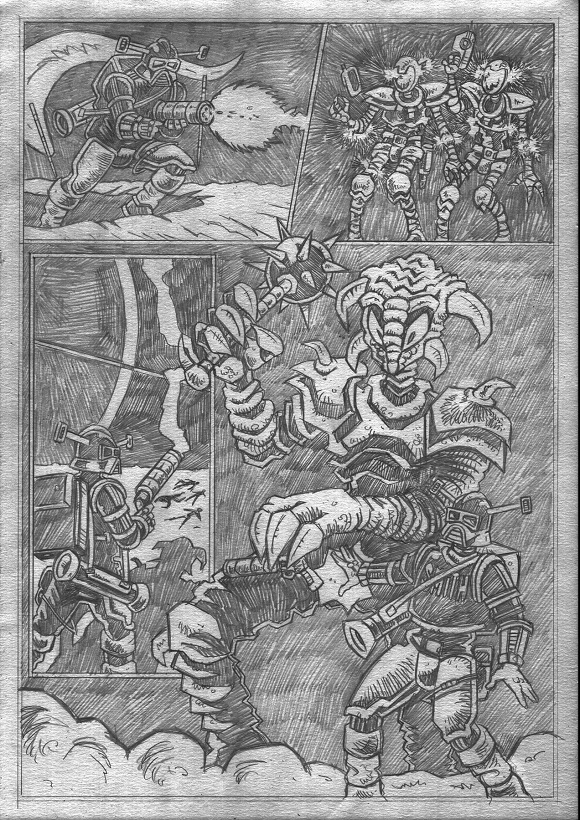 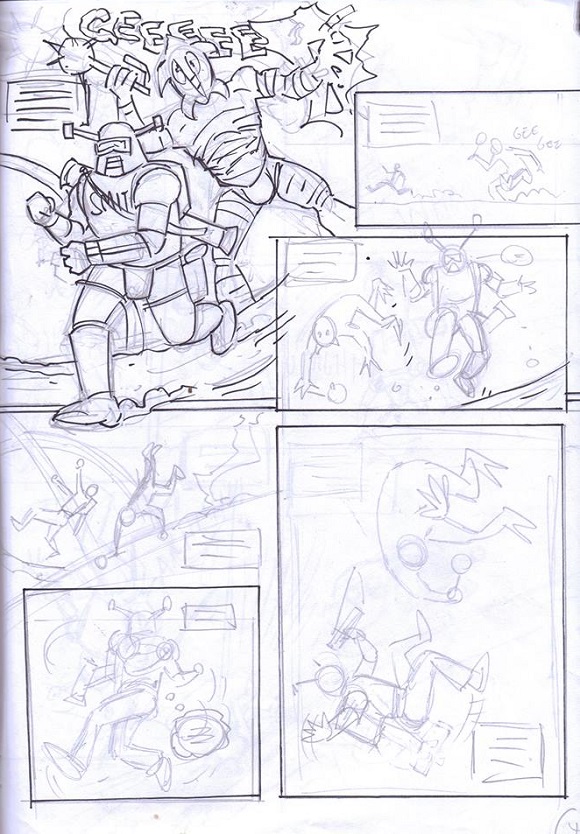 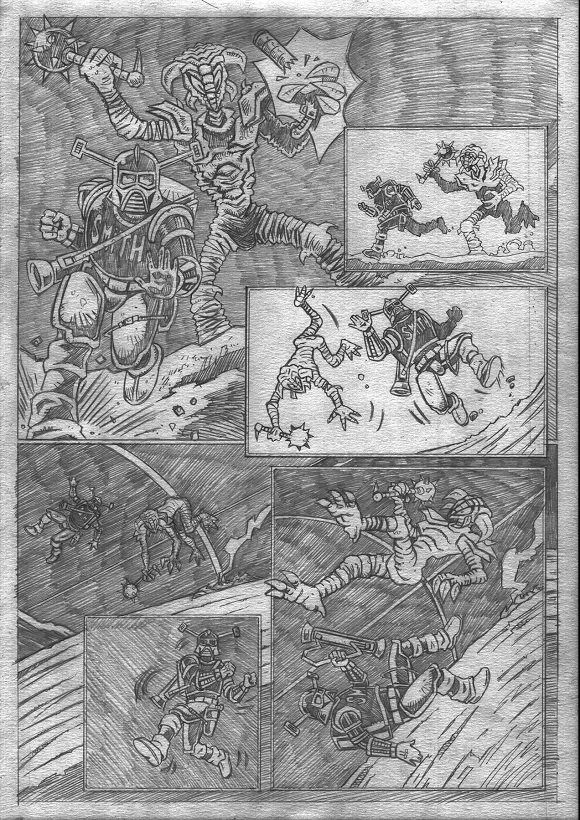 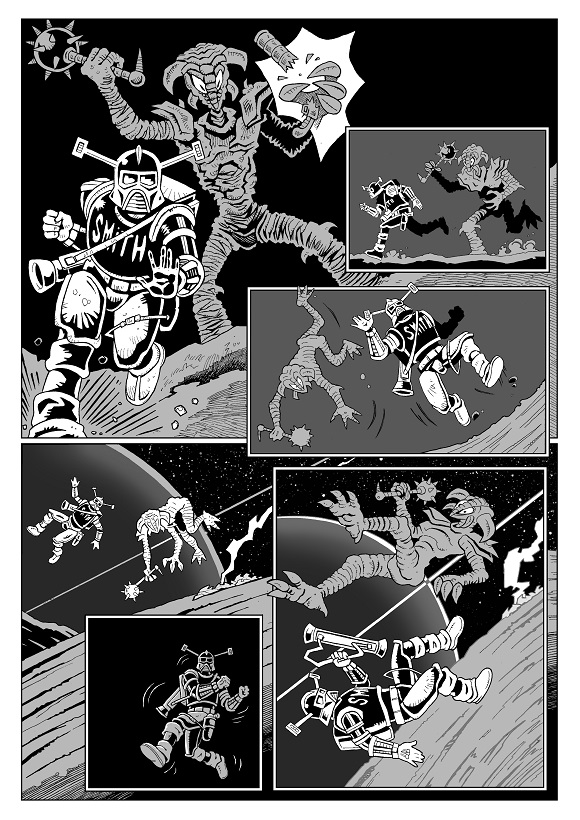 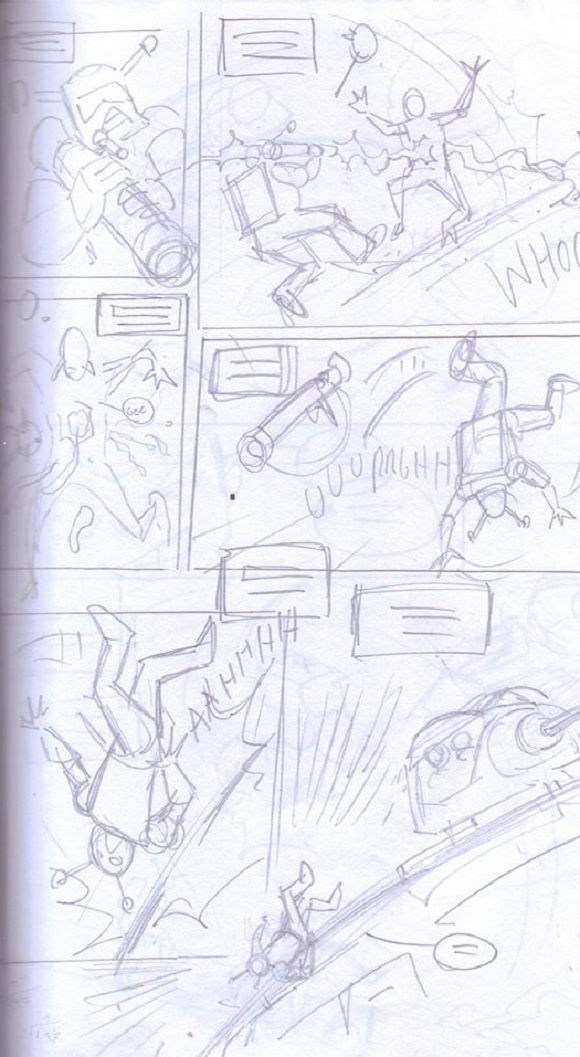 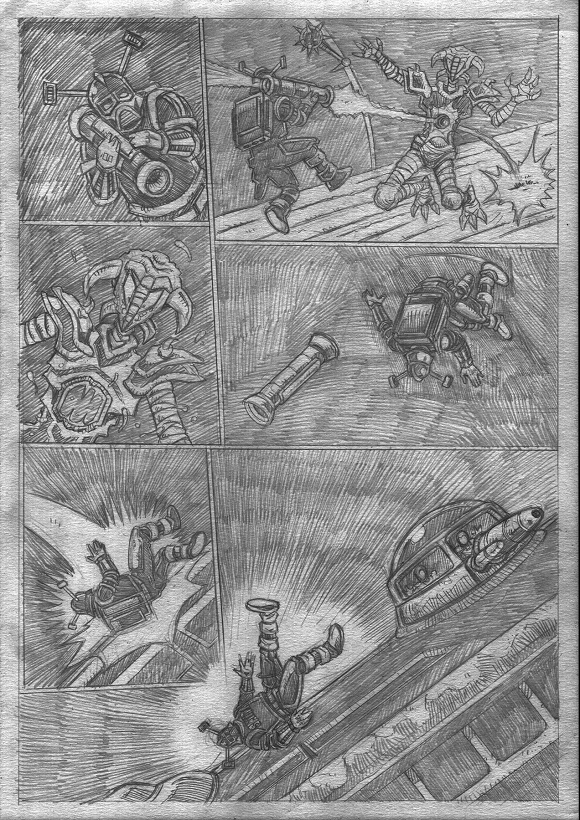 Above: Finished pencils for page five. 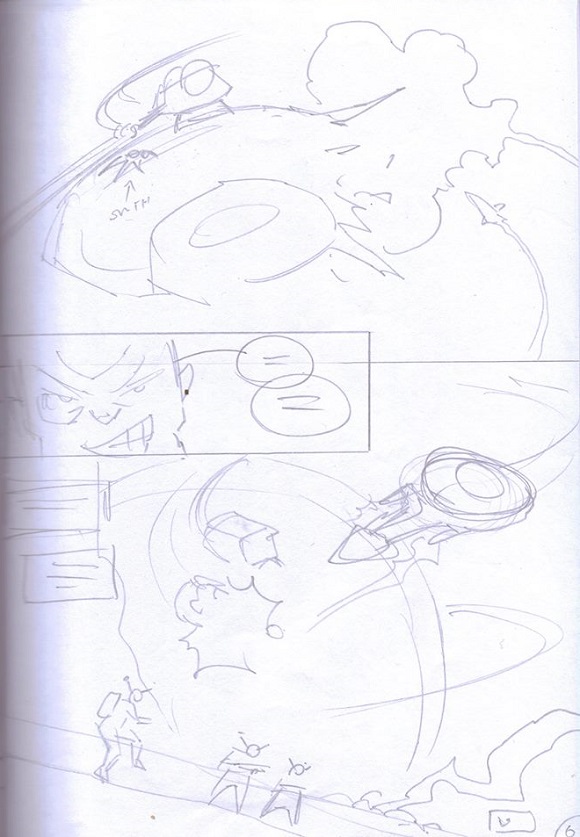 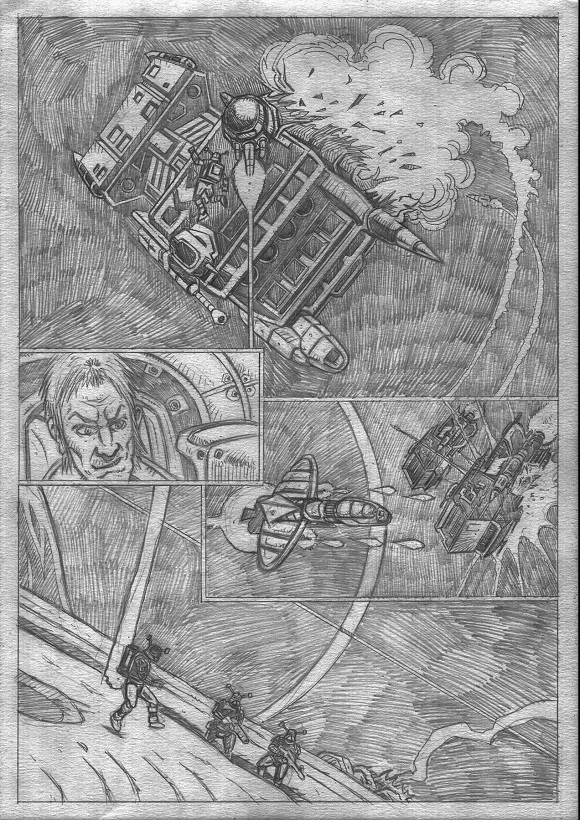 Above: Finished pencils for page six.

Conclusion.
I had a great time drawing this script. Getting the chance to draw the classic V.C. troopers space suit and the Geeks really brought back happy memories of reading 2000AD in bed every Saturday morning nearly forty years ago.

Above: Advert art for The V.C.'s Raid on Caliban which was posted on the internet.

Where to buy:
The V.C.'s Raid on Caliban appears in Zarjaz #27 (see the cover pic below) which can be bought online via the Futurequake online shop here: http://www.futurequake.co.uk/zarjaz/zarjaz-27/ 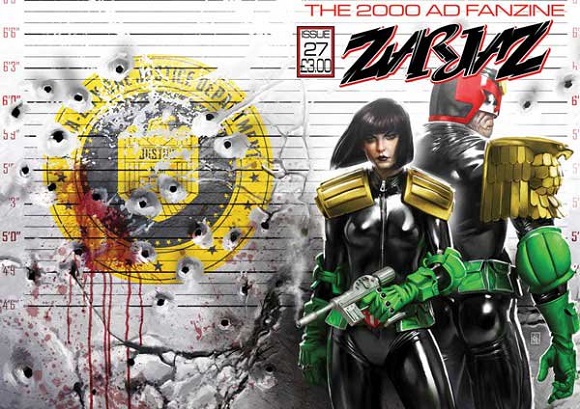 Below: The V.C.'s collected edition cover by artist Cam Kennedy available to by as a digital comic from the 2000AD online shop here https://shop.2000ad.com/catalogue/graphic-novels/more-titles/GRN337 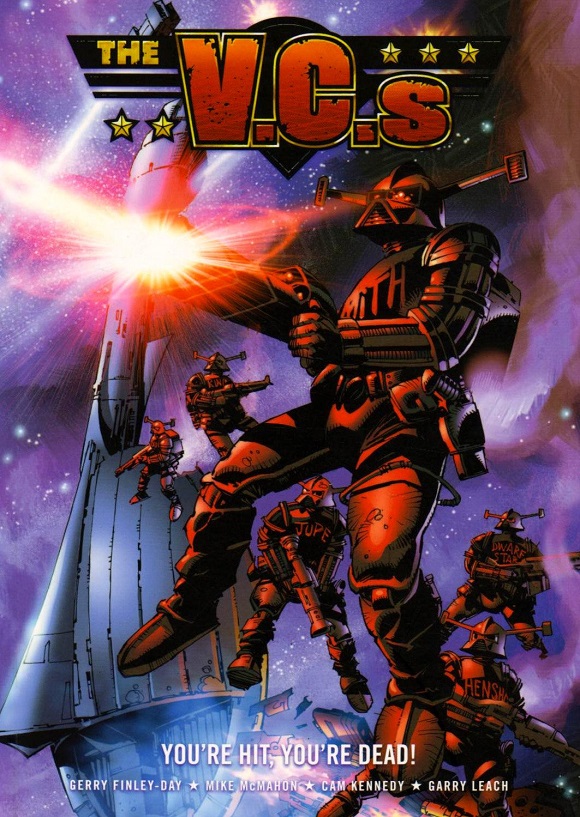