STRONTIUM DOG. NO CHOICE AT ALL.

Above: Johnny Alpha on the trail of an SD Agent gone bad.

Introduction:
Way back in July 2012 I had worked on a Judge Dredd story Entitled 'Big Jimping' written by Lee Robson for the 2000AD fanzine 'Zarjaz'. When Dave Evans the editor of 'Zarjaz and Dogbreath' sent
me Lee's script for Strontium Dog 'No choice at all' I knew it was going to be a great story.

The Script:
DB: Here is a word from Lee.

LR: There’s no easy way to say this, so I’m just going to come out and say it: I’m not a massive fan of Strontium Dog. So, when editor extraordinaire Bolt-01 asked me to contribute a couple of scripts to Dogbreath, I stupidly said yes…

I knew going in that I wanted to take another crack at Durham Red. With my first attempt, back in Dogbreath #27, I never really got the character right, so I wanted to try again, with something more simple and straightforward. Once I started to lay out the foundations of what became Like A Dog, one plot beat kept niggling away at me: Durham was set up to become the unwitting star of a “snuff” vid. But who had set her up?

I knew it had to be another S/D agent, but if it wasn’t a personal grudge (which – spoilers! – it’s not), then it would stand to reason that she wasn’t the only Stront that was set up. And if agents were being set up, then, surely, Johnny Alpha was the man to get to the bottom of it…

The idea was to set the story at the same time as Like A Dog, but also push away from the “Western in space” approach that I’d tried on my previous attempts at writing Alpha. This time, I decided, I’d set the whole thing in an urban environment and have Alpha on the run, because… Well, at the time, I didn’t know why he would be on the run. All I had was the idea of the story starting in the middle of a scene, with Alpha stranded on a ledge while the local police searched the room beyond. I knew I had to somehow connect that scene to the idea of Alpha trying to track down the traitor from The Doghouse, but I really couldn’t figure it out.

After a lot of frustrating starts and stops, I finally managed to pull the story threads together – albeit very, very slowly – and started bridging all the gaps that would link the story to Like A Dog. My only problem was, I didn’t have an ending…

By that, I mean – spoilers! – Alpha gets his man, but, the way the story unfolded, he was still wanted by the local police and trapped in an unfamiliar city, and I was running out of pages (I’d set myself a very rigid eight page target). So, I had to, basically, end it how I started it, in the middle of a scene.

I was never completely happy with the ending I came up with, I’ll admit, but, by the time I got there, I was just glad to have the thing finished and submitted, and the lads at Zarjaz seemed to like it, so who was I to argue? Looking back it now, though, I kind of dig it…

I got paired up with Paul Williams for Like A Dog and David for No Choice At All. I’d worked with both of them before (both on Dredd tales for Zarjaz, oddly enough), and I knew both of them would bring their A Game, so I wouldn’t have to worry on that front. It’s fair to say, though, they both surprised me with what they came up with: Paul’s dynamic storytelling knocked me off my feet, and David came up with what has to be one of the best Strontium Dog designs I’ve ever seen, with the villainous Gil Gilman.

From my perspective, it was an interesting experiment, trying to tell these two stories like that; it pushed me out of my comfort zone in more ways than one, and I learned a lot from trying it – mainly that I should never try it again… 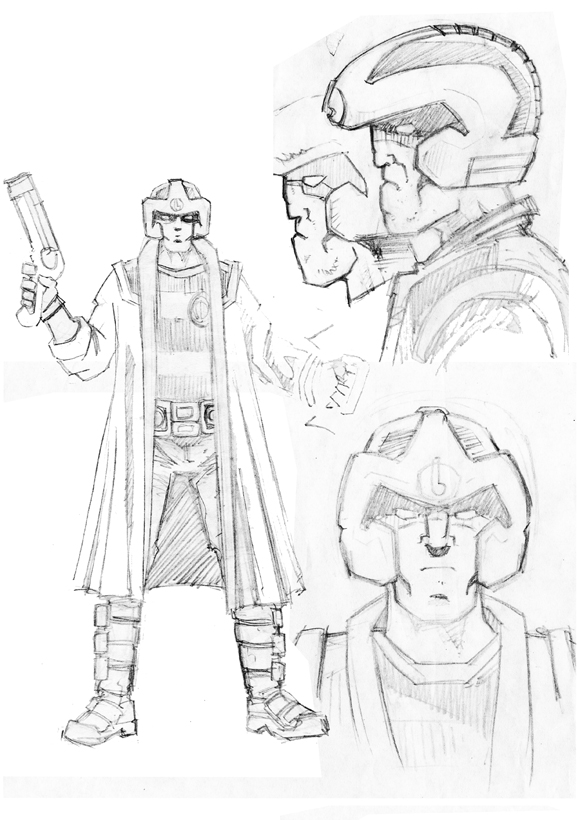 Above: No body can draw Johnny Alpha as good as his co-creator Carlos Ezquerra. In fact (in my humble opinion) artists hoping to get anywhere close drawing a good Johnny Alpha need to almost mimic Carlos's style...at least for the face. This is something that I had stuck to when drawing Johnny for previous Dogbreath scripts. This time I decided to have a go at a little redesign on Johnny's helmet, his clothes and try and put a little more of my 'take' on Johnny's face. 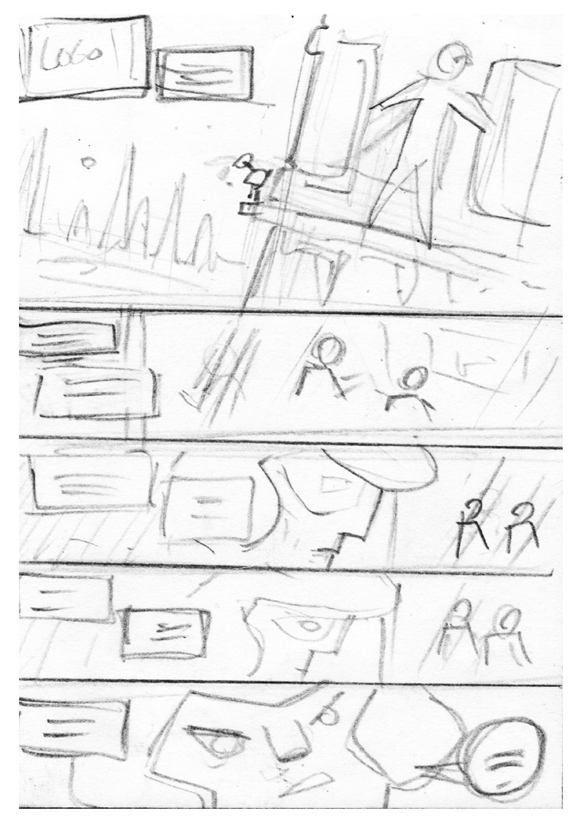 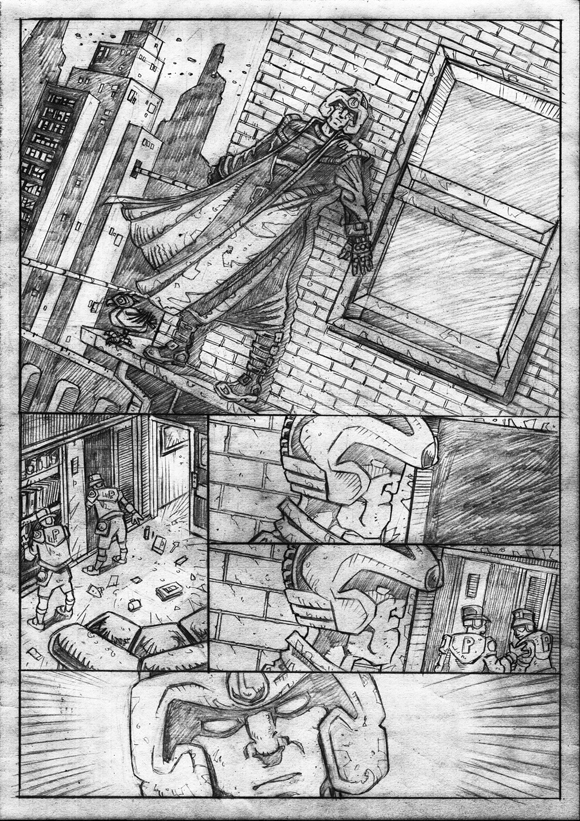 Above: Finished pencils with adjusted panel layout for page one. 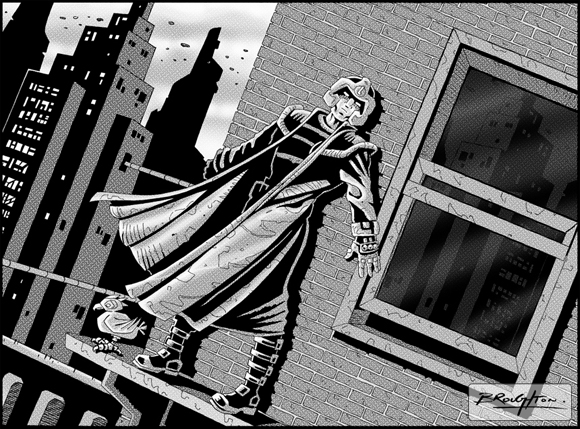 Above: Finished inks and greytones for panel one of page one. 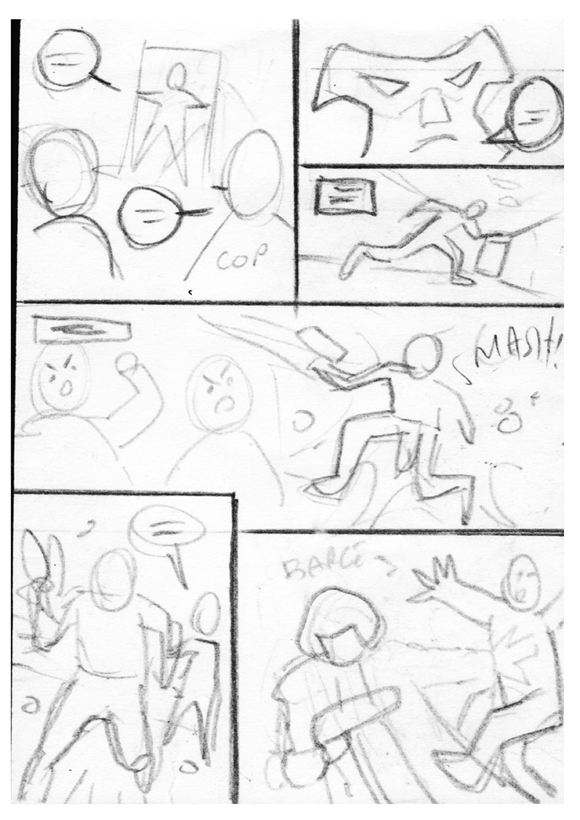 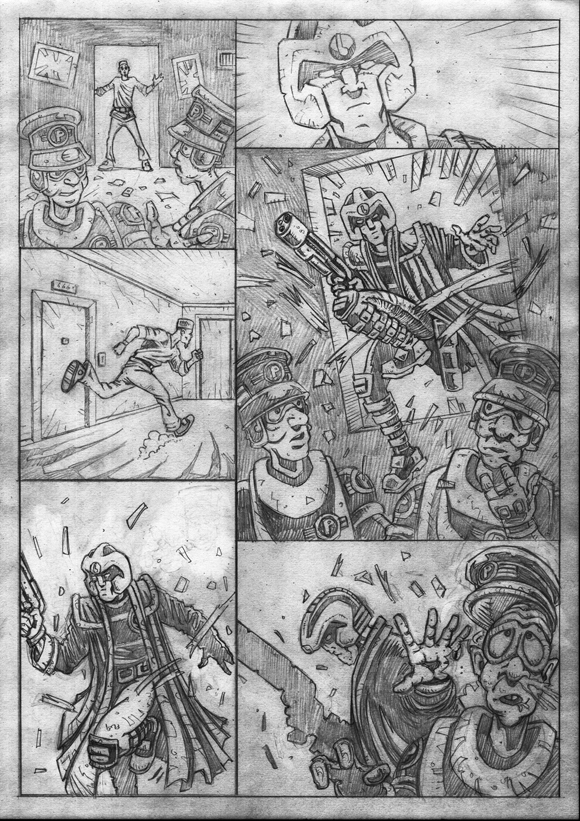 Above: Finished pencils for page two with adjusted panel layout. 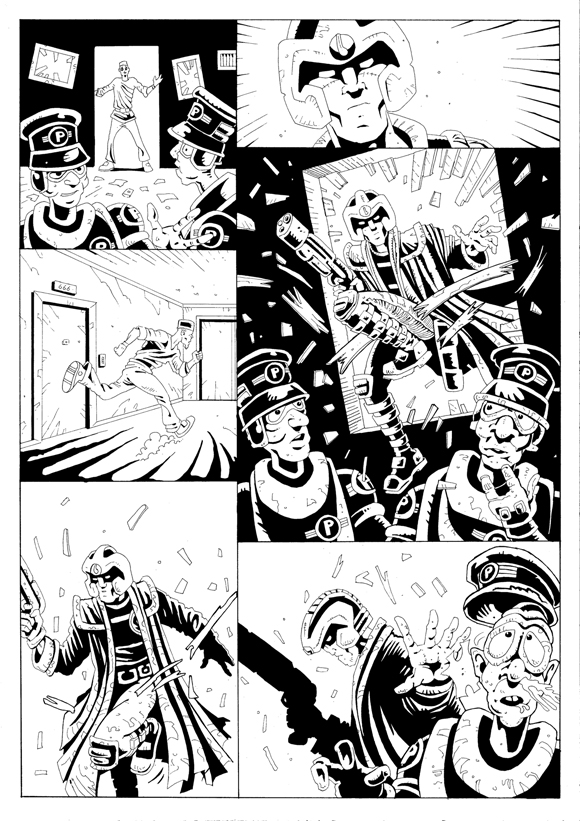 Above: Finished page inks using Rotring pens for outlines. Then Brush and ink for blocking. 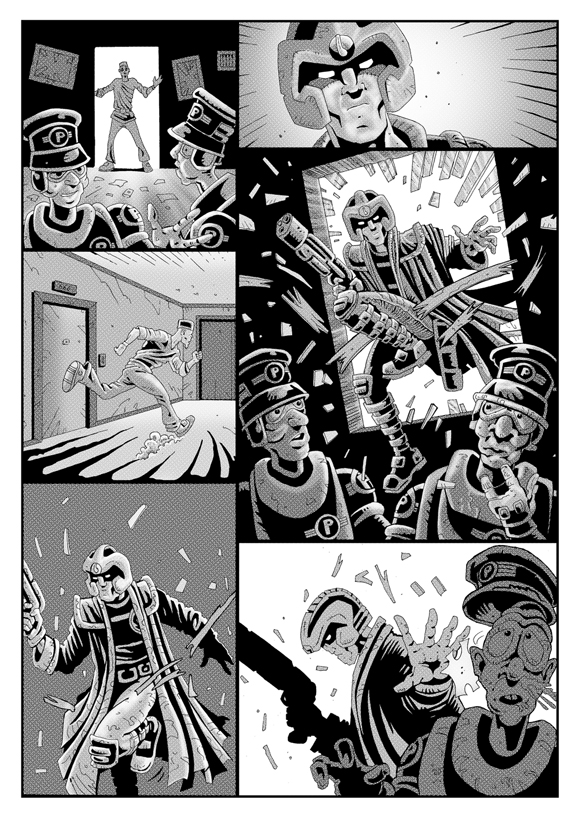 Above: Finished page with greytones which were added digitally. 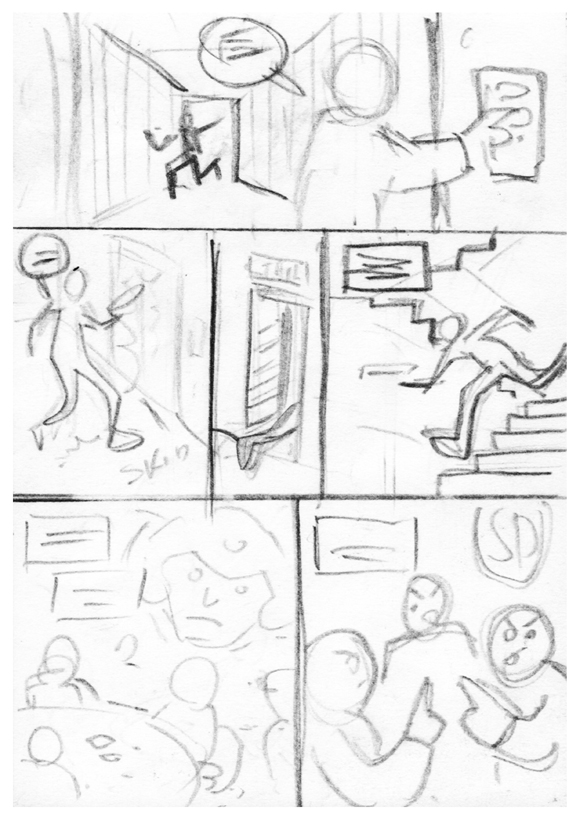 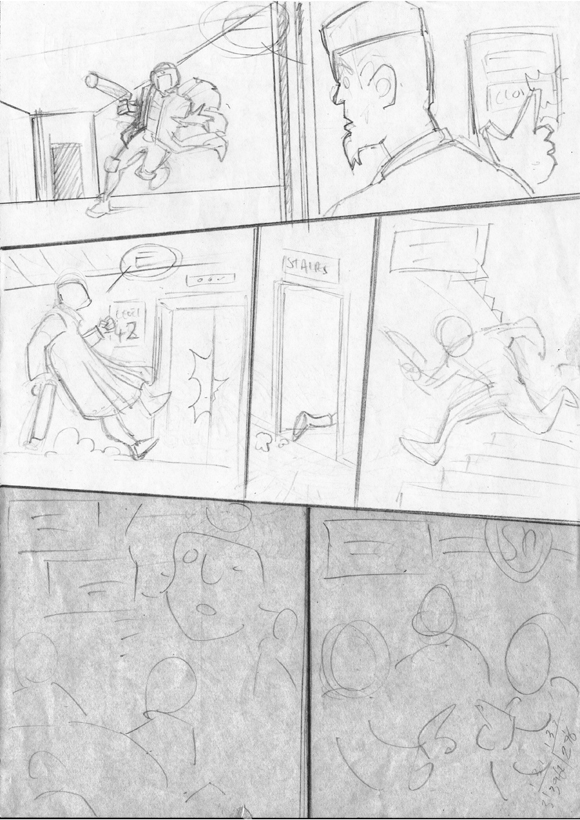 Above: Second rough page layout, this time with more detail to make sure that I could get the dynamic poses that I wanted in the panels. 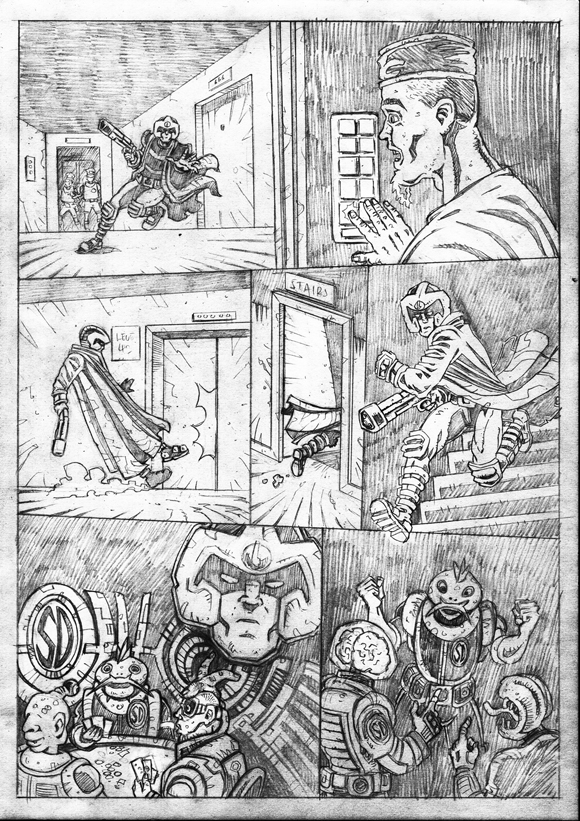 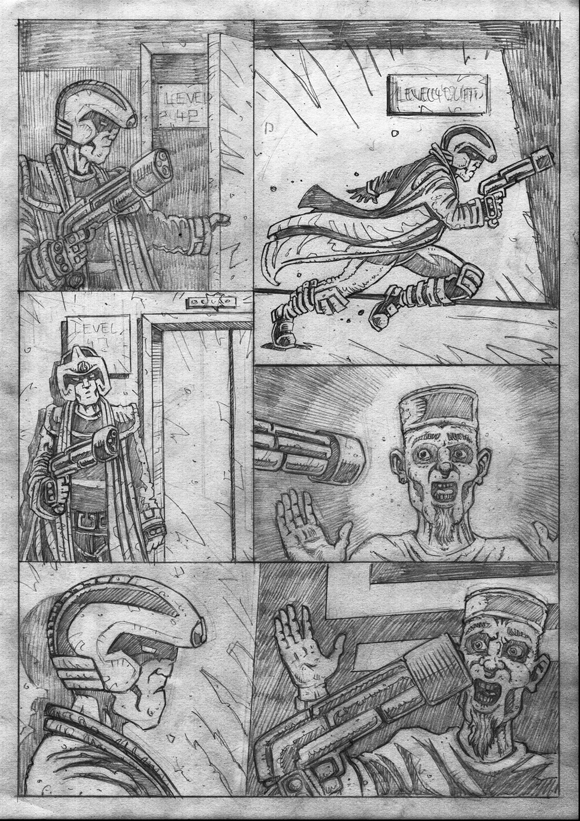 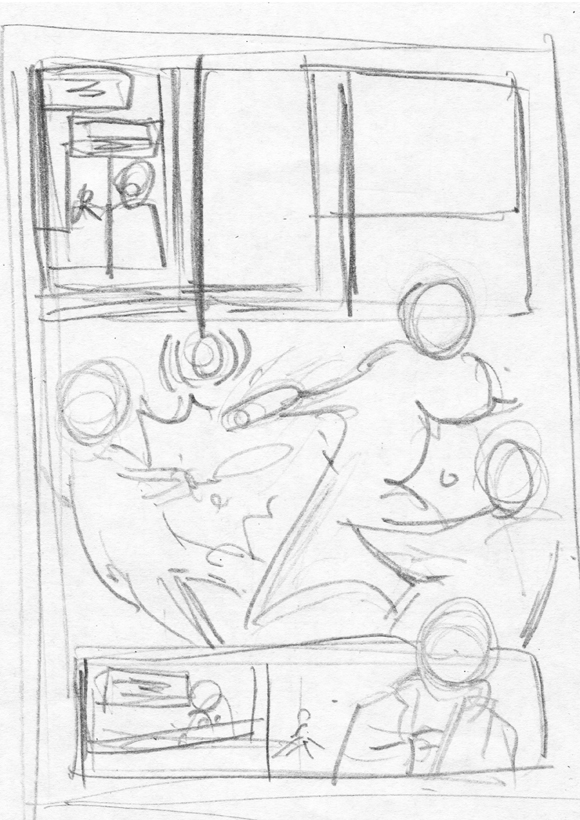 Above: Rough page layout for page five. I really wanted a larger splash panel for panel four so that I could do justice to the action. 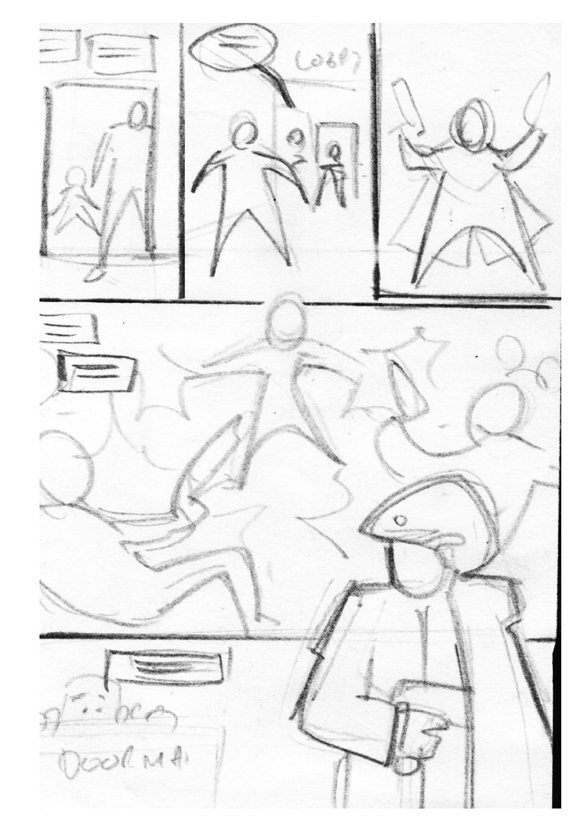 Above: I decided to have another go at designing the panellayout forpage five. This time with a more dynamic panel popping panel five. 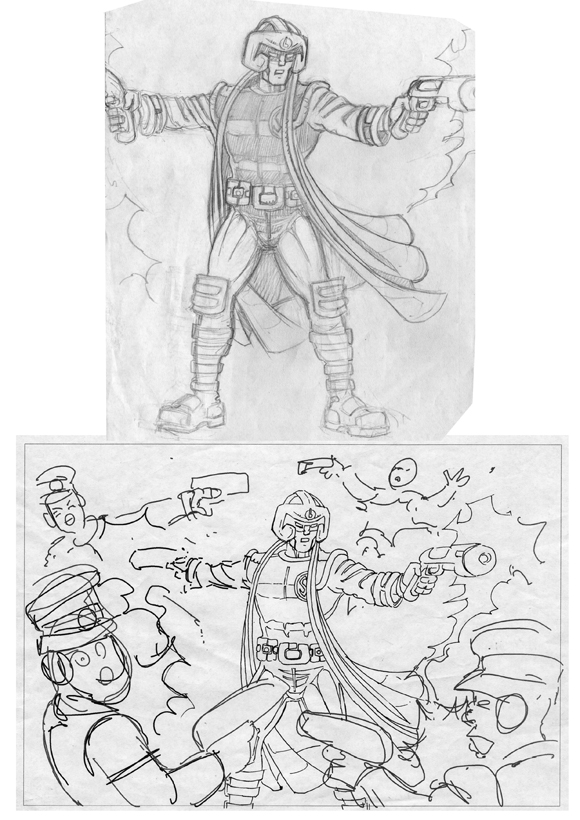 Above: Rough layouts and designs for panel five. 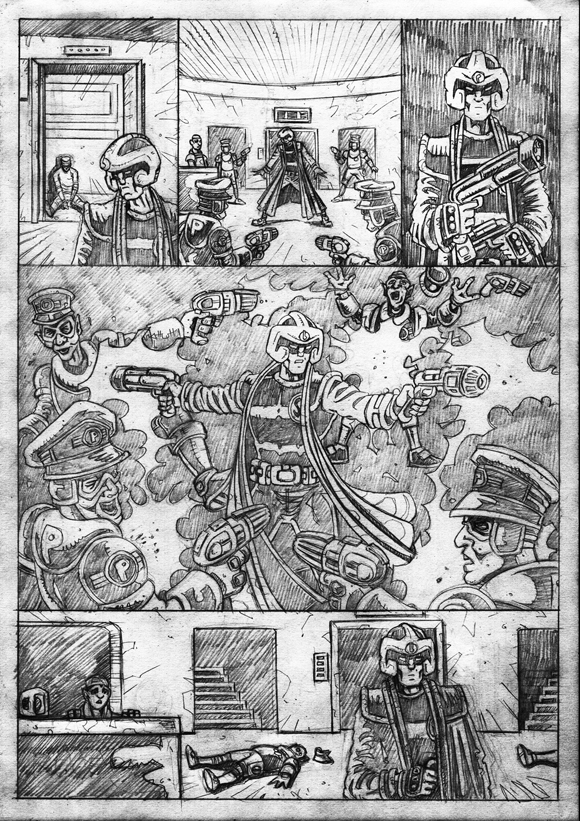 Above: Finished pencils for page five. I dropped the dynamic panel five idea as seen in the second rough page layout. 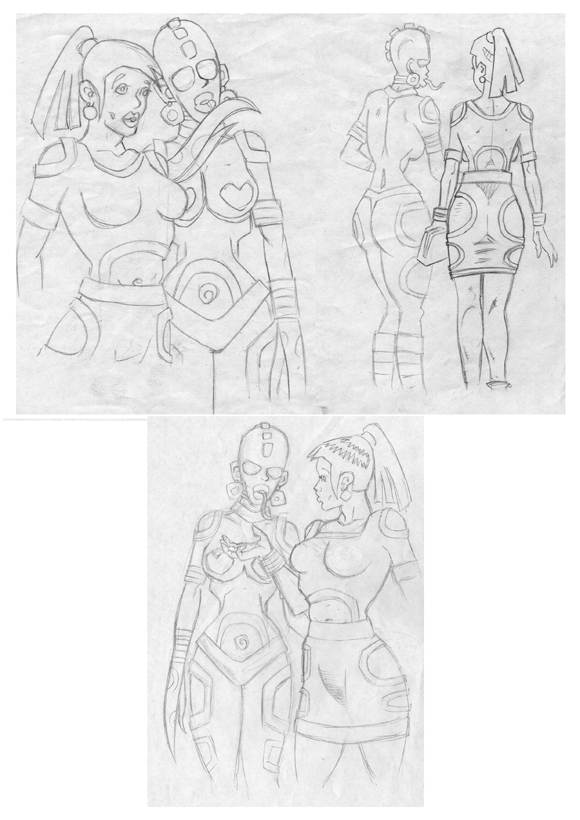 Above: Original page pencils for the sex workers. 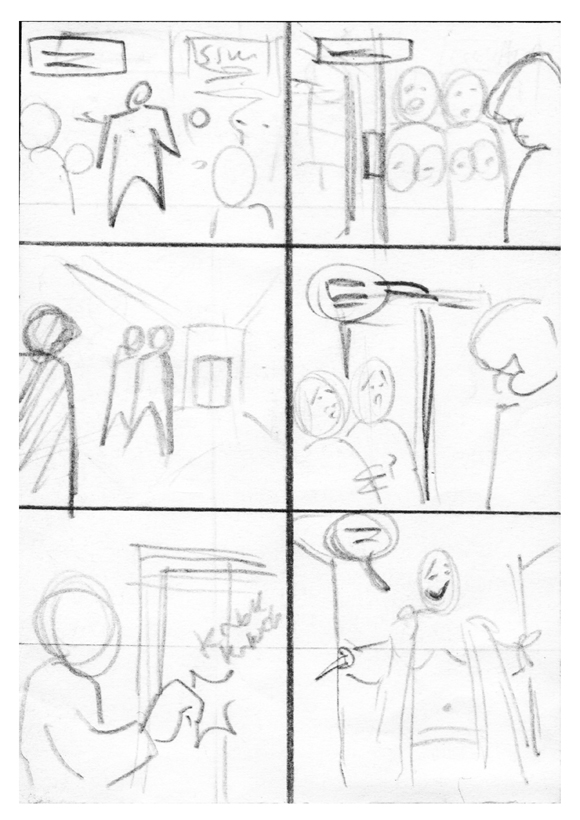 Above: Page layout for page six. 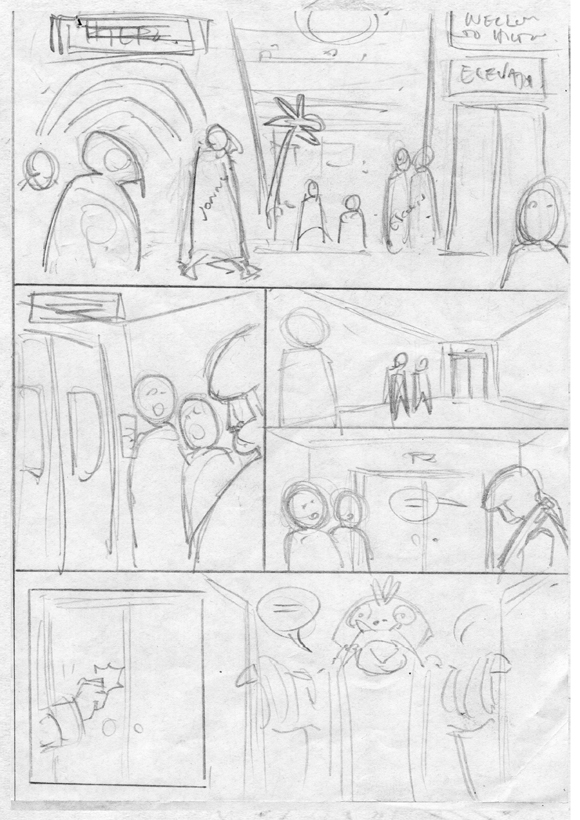 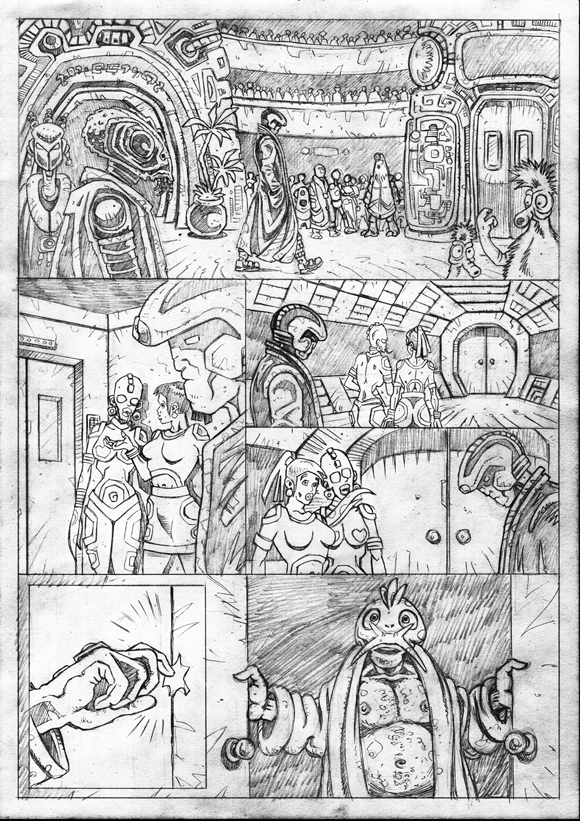 Above: Finished pencil for page six. 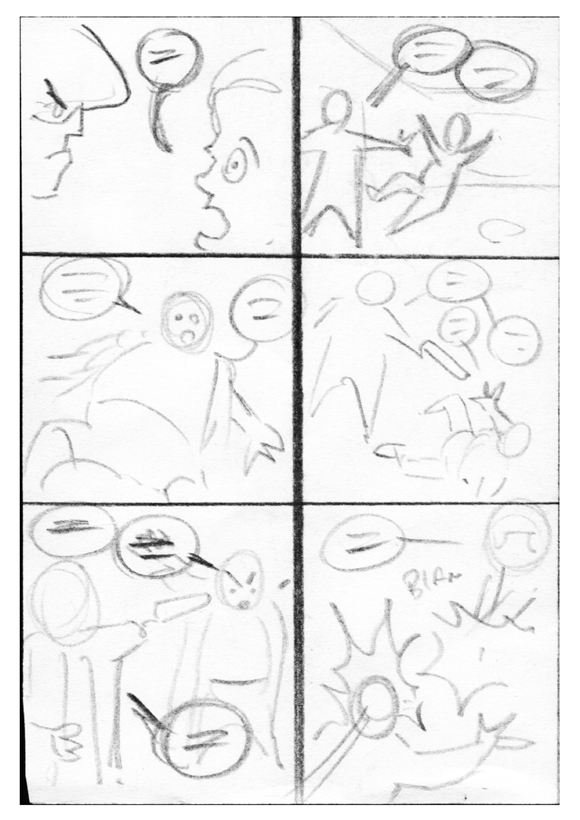 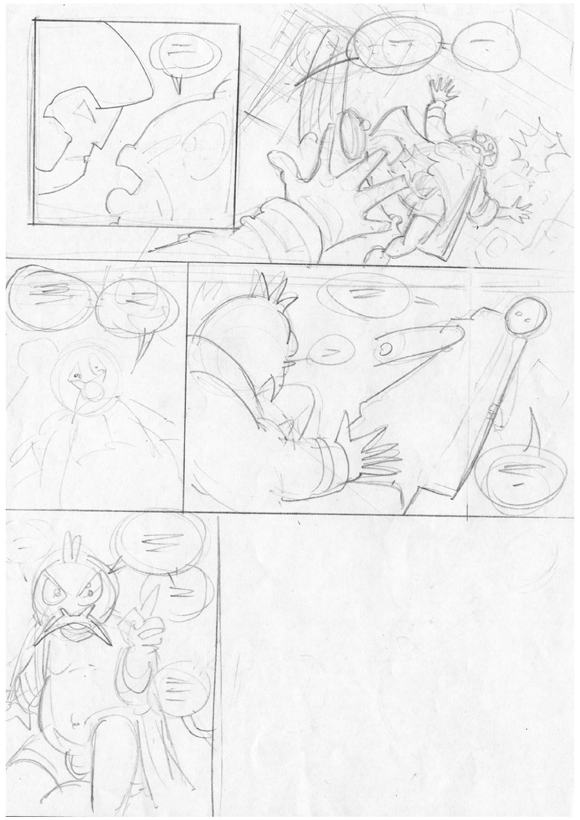 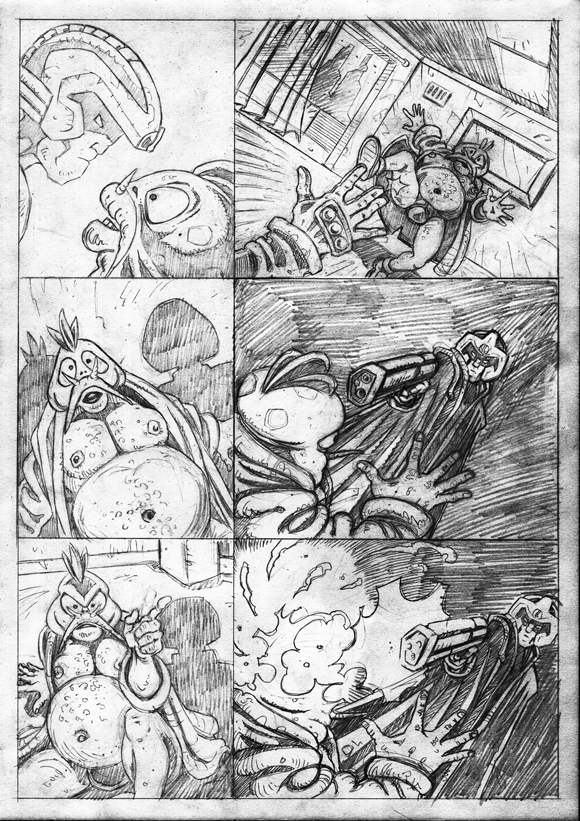 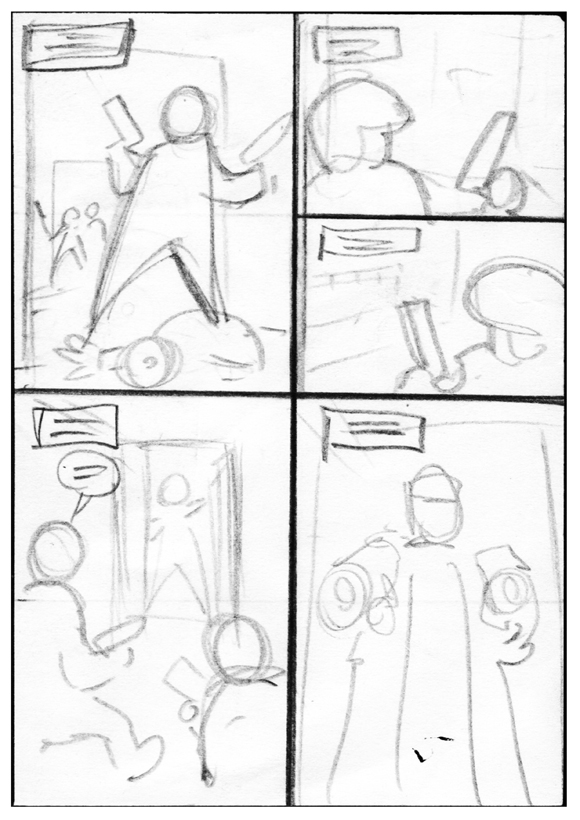 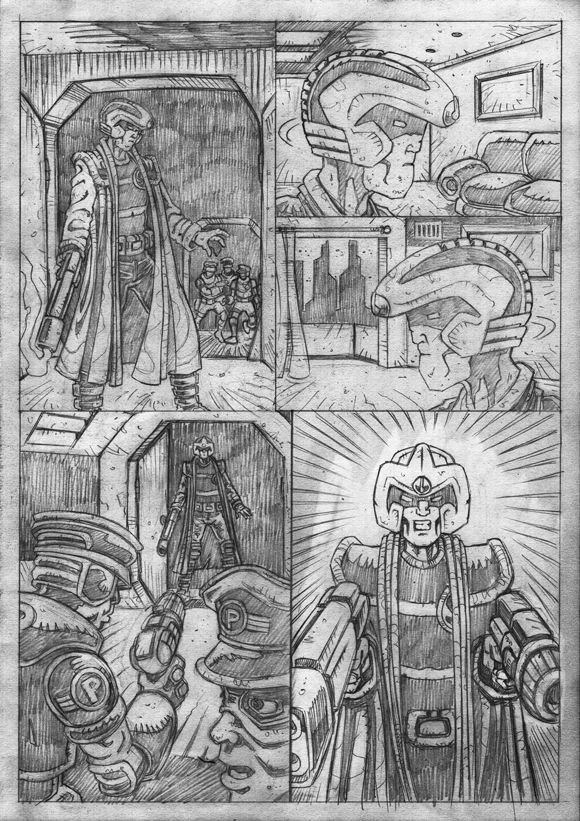 Above: Finished pencils for page eight.

Conclusion.
This was a great script which was fun to draw. Lee really knows his Johnny Alpha thats for sure.

Where to buy:
Stontium Dog 'No choice at all' appears in Dogbreath #31 (see the cover pic below) which can be bought online via the Futurequake online shop here: http://www.futurequake.co.uk/dogbreath/dogbreath-31/ 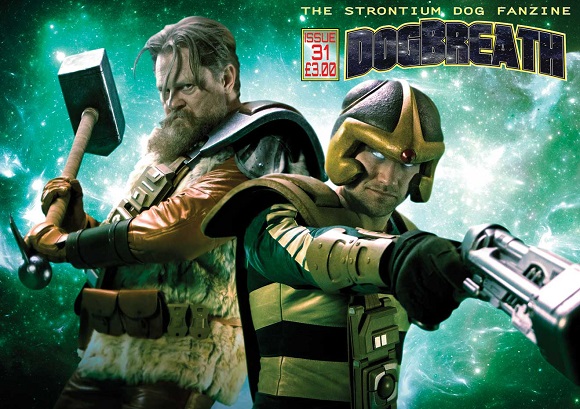 Other links:
If you have enjoyed reading this behind the scene break down here are a few more...
ABC Warriors 'The Final Battle.
Judge Dredd 'Bad Crop'.
Judge Dredd 'Yet another rainy day.'
Strontium Dog 'Death by Dog.'
Comic Rock 'Silver Song'.
A look inside Shaman Kane Book 1.
Posted by David Broughton Comic Strip Artist. at 22:57