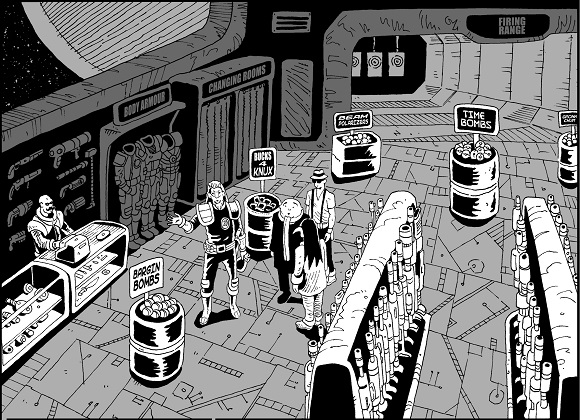 Above: SD Agent McGinty provides a guided tour of the Dog house for the new recruits.

Introduction: First Day was my first script written by Matt Sharp, sent to me way back in
April 2014 by Editor Dave Evans AKA Bolt 01. Since then I have worked on at least 3 more scripts with Matt. I hope you enjoy reading this post detailing the behind the scenes information on 'our' first story. 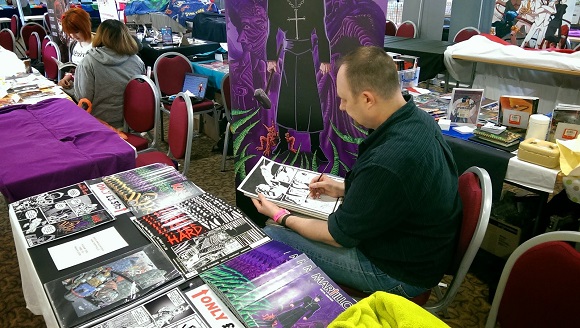 Above: Myself inking a page Sunday morning at the 2014 Bristol Comic convention before the doors opened.

The Script: Matt Sharp gives us an insight into his ideas for 'First Day'.

I initially responded to Dogbreath’s ‘call to arms’ for Strontium Dog script submissions with a prose story called ‘Twilight of the Dogs’, which I thought might be a quick and easy way of filling a few pages with the minimum of artwork. Dave and Richmond seemed to really like it and it appeared in Dogbreath 28, with art by Jim Campbell (buy it today!). I decided to have a go at writing an actual comic strip. I wracked my brain for ideas, eventually settling on a couple of rookie Stronts arriving at the Doghouse and receiving a guided tour of the weird environment. I concocted the characters that would eventually become Urb and Stell, and after considering a whole range of possible guides (including, but not limited to, Middenface McNulty, Maeve the Many Armed and Kid Knee) I recalled that one of the supporting characters from Maeve the Many Armed already acted as a guide to a rookie Strontium Dog, I decided that the goat faced Irish mutie, Maginty, fitted best with the story (although I didn’t realise that I’d misspelled his surname as ‘McGinty’ until most of the Tales of the Doghouse turned up in a floppy with the Megazine, a long time after I’d submitted the script!). Above: Rough Sketches for Stell (on the left) and Rab (on the right).

Even before I’d started writing anything down, I realised that the Urb and Stell didn’t quite work as a double act, so added Rab to the mix. I’d never actually written a script before, but I do have a background in roleplaying games so set about writing the script in a similar way to how I’d approach describing a scene – starting with a detailed description of where the characters are and what they’re are doing in the scene, then just describing what they’re are doing in subsequent panels until the scene changes. Some of the panel descriptions ended up extremely detailed – the Armoury introduction on page five is particularly excessive! There were also detailed descriptions of the main characters added at the end of the script.

Anyhoo, after a while I finally had a completed script in front of me – a twenty two page long epic of four characters wandering about a space station (plus a pub crawl). Rewrites were required. I got rid of a lot of the nonsense and before long the script was a lean… thirteen pages. At this point, I realised that strips in Dogbreath are generally about six pages long, have Johnny Alpha in them somewhere, as well as some action and adventuring and, probably most important of all, one of those ‘plot’ thingies, so maybe the first thing I submitted ought to be about six pages long, have Johnny Alpha in it and a plot. This became ‘The Scowl and the Pussycat’ which I was, frankly, expecting to get rejected for being ‘too silly’ (it’s in Dogbreath 31, with art by Neil Sims – buy it today!) I wrote a couple of others (two page scripts seemed like a good bet – I’ve worked as a magazine editor so I know how annoying a two page gap can be!) before I came back to look at ‘The First Day’ again.

Apart from a few changes (Stell was originally noseless, inspired by a picture of Patricia Morrison from the Sisters of Mercy where she looks like she hasn’t got a nose, but as Dogbreath already has a noseless female Strontium Dog in the form of Alec Robertson and Bruce McLaren’s Laura Gonzalez, she got rewritten as a slightly Goth girl with a gigantic Gerald Scarfe caricature nose instead), and encouraged by a couple of scripts getting accepted, I eventually decided to submit the thirteen page version – although I did submit it along with an email that was so negative about it that I managed to persuade Bolt 01 to reject it without reading it. I submitted it again with something called a more ‘pos-it-ive’ approach.

First Submission Attempt Attached is another script, detailing a group of newly recruited Strontium Dogs' first day aboard the Doghouse ... it's probably already been done, though, and I'm afraid it ran away with me a bit so it ended up thirteen pages long, nothing much happens and just sort of... stops... instead of ends properly! Second Submission Attempt Oh. Errr... Aha! I see what I did there! (Switches from default 'pessimistic hyper-critical of own work mode' to 'deluxe PR positive spin mode' and tries again...) Ahem... 'Attached is a detailed narrative that manages to combine a day in the life of a Strontium Dog timeline with a tour of the unique environment of the Doghouse through the eyes of three new recruits in the company of a SPECIAL GUEST STAR!!! At thirteen pages, it's a TRUE EPIC, sure to shore-up the slush pile against future thrill shortages...'

Bolt and Richmond appeared to like it, although it was still far too long and they requested a five to six page version. By deleting Rab’s sexual magnetism, making cuts to the Registration Office scene, rewriting the Armoury scene and loosing another bar, I managed to get it down to… eight pages, and submitted it again (looking at it now, I would probably get it down to four pages). But I got away with eight pages and it was accepted.

Strangely, the first script I’d written was the first to go to an artist – David Broughton (by coincidence, a scenario called ‘Murder on the Megaways’ in Signs & Portents Roleplayer 30 – 31 I’d written for the Judge Dredd Roleplaying Game in 2006 includes a Judge Broughton), although ‘Comic Rock – Silver Song’ (seventh or eighth submitted, I think) made it into print in record time and beat it into Zarjaz to became my first published comic strip. Apart from requesting a few changes (I’d described Rab as wearing a black suit like the 2Tone Records guy, David gave him a Rude Boy look instead because he didn’t want everyone wearing black –this left him looking remarkably similar to a character from ITV’s Jekyll & Hyde series called the Cutter, which appeared on TV a few months later), David quickly set about producing the artwork. It seemed very odd to see page one turn up as a work in progress in a photo at a convention – despite all the rewrites, I don’t think page one changed at all from my first draft. 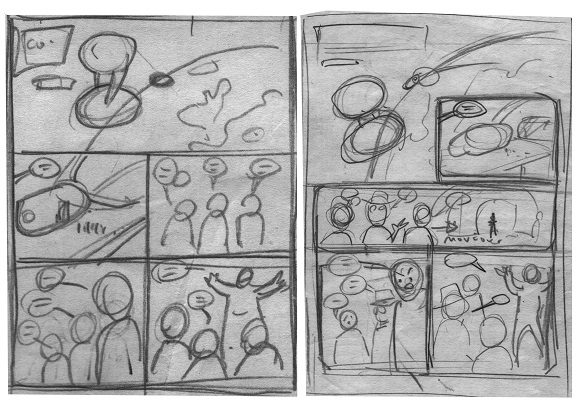 Above: Rough Layouts for page one.  Note: The layout on the left was designed with a bigger first panel.  I decided to make the page layout more interesting and so came up with a second page layout seen on the right. 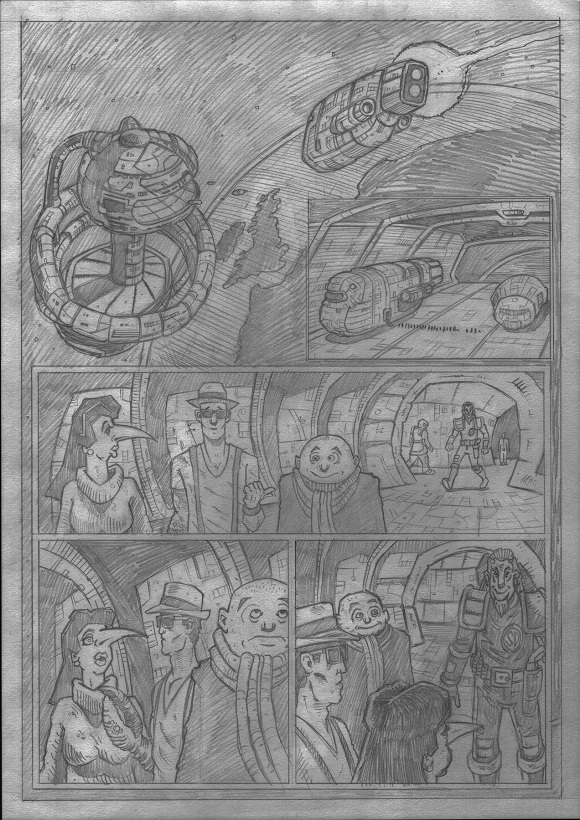 Above: The finished page pencils based on my second rough page layout. 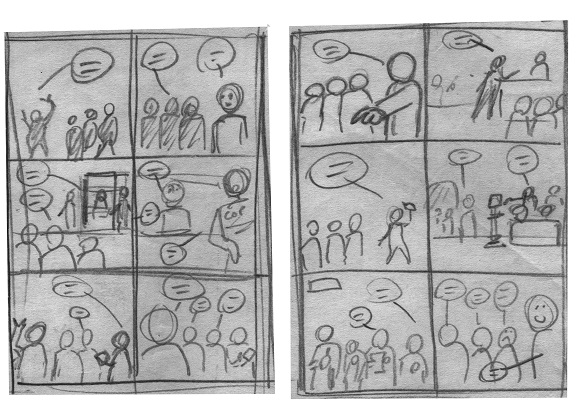 Above: Rough page layouts for pages two and three. Note: These layouts were very basic and mainly there to show me what was going on in each panel.  Note the word balloon placement. 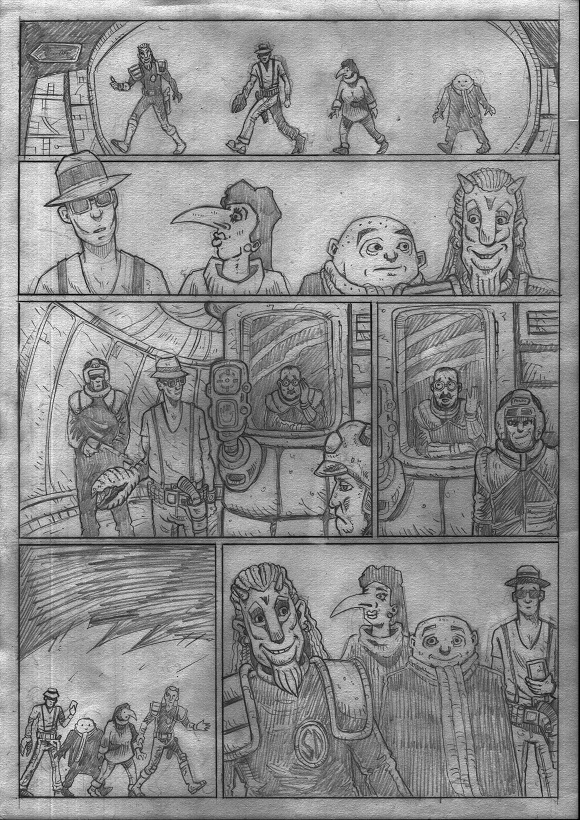 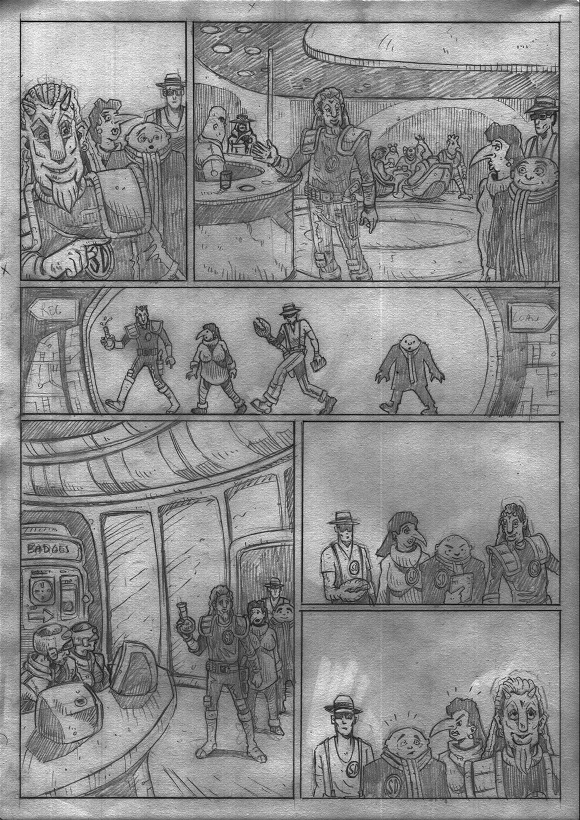 Above: Finished pencils for page three. Note: Where possible I used reference from classic Strontium Dog stories drawn by Carlos Ezquerra to recreate the 'Kennel' and other watering holes in the Doghouse. 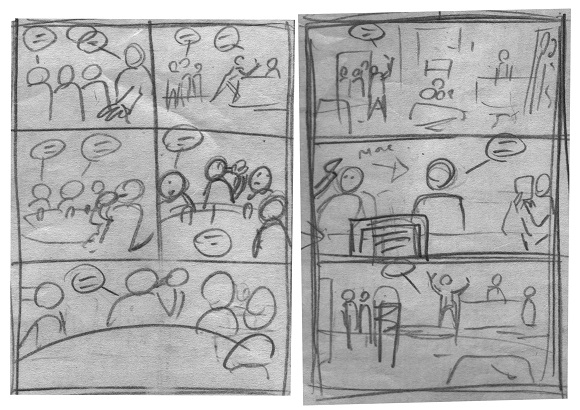 Above: Rough page layouts for pages four and five. 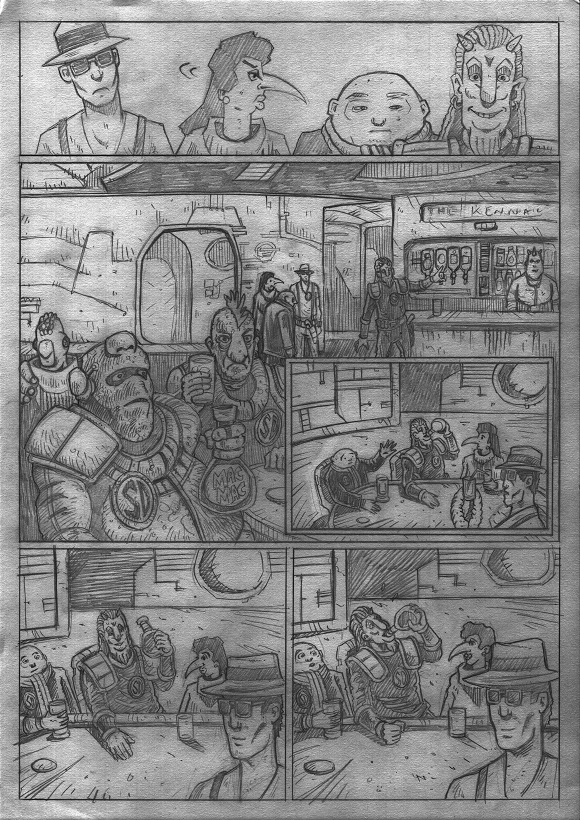 Above: Finished pencils for page four. Note: I included the fan created (I think he was created by Dave Evans editor of Zarjaz and Dogbreath) Strontium Dog 'Whistler' in panel two. Whistler is famed for being drawn by Carlos Ezquerra in a classic Strontium Dog story 'The life and Death of Johnny Alpha' written by John Wagner and can be seen on the last page of 'Mutant Spring' 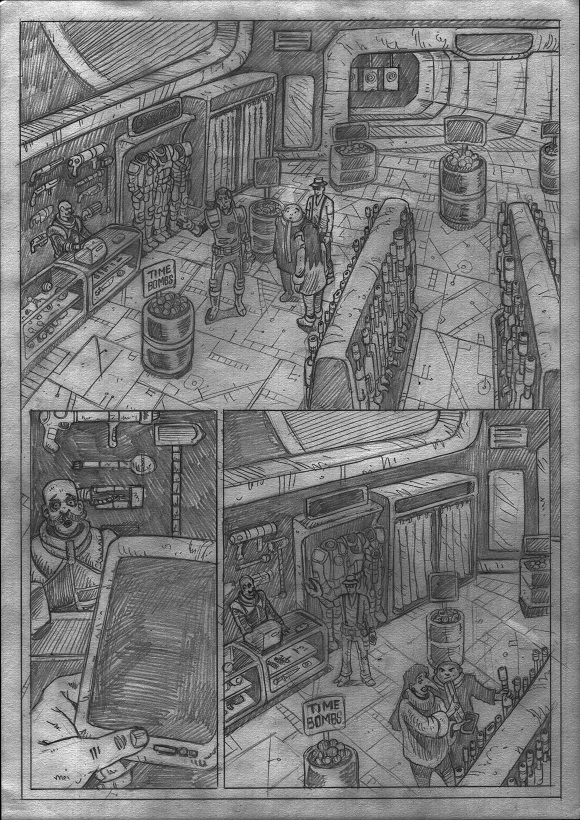 Above: Finished pencils for page five.  Note: I included a few items like Wulfs Hammer and a Westinghouse blaster in the panels. I also had fun with the bargin bin signs seen in panels one and three.  Although my favourite sign on the far right of panel one 'Gronk Chum' was too small to be read when printed. 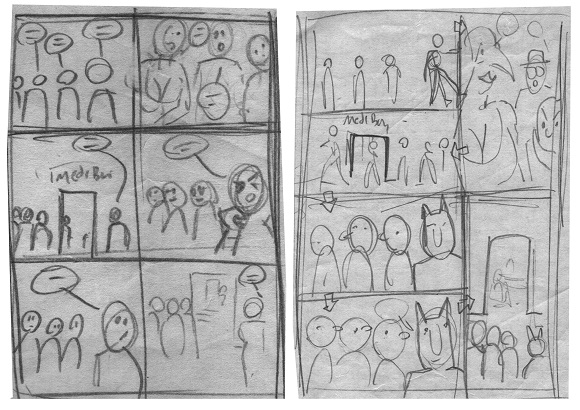 Above: Rough page layouts for page six. Note: This was a tough page to lay out.  I started with the basic layout seen on the left. Then due to script requirements, the contents of each panel and the movement of the charcters from each panel to the next, I decided to break the 'Holy Grail' of panel layouts by using arrows to direct the reader. 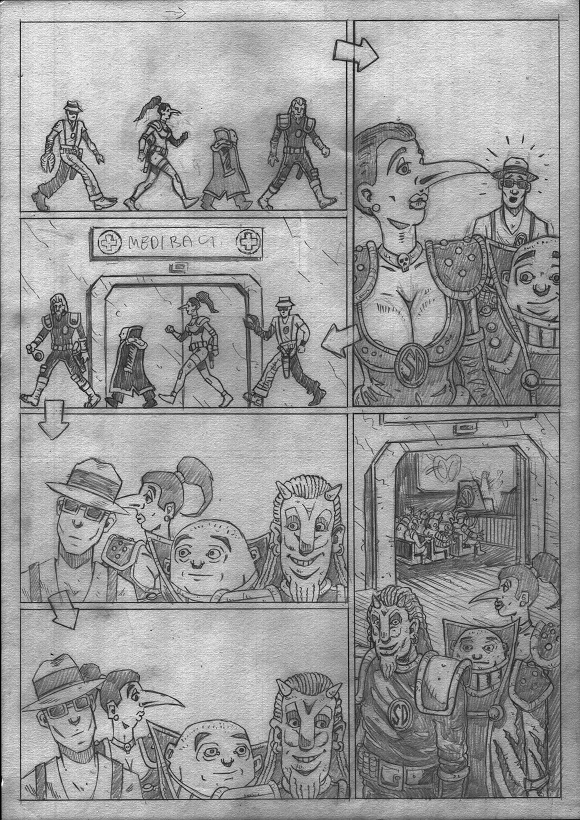 Above: Finished pencils for page six. Note: I feel that the arrows mentioned in my previous notes add to the humour and help to create the sense that McGinty is leading them 'all over the shop'. 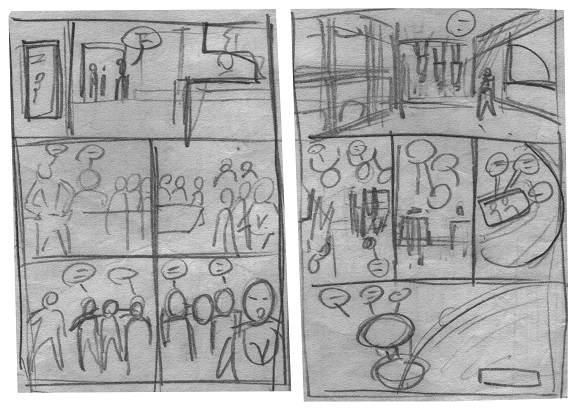 Above: Rough page layouts for pages seven and eight. 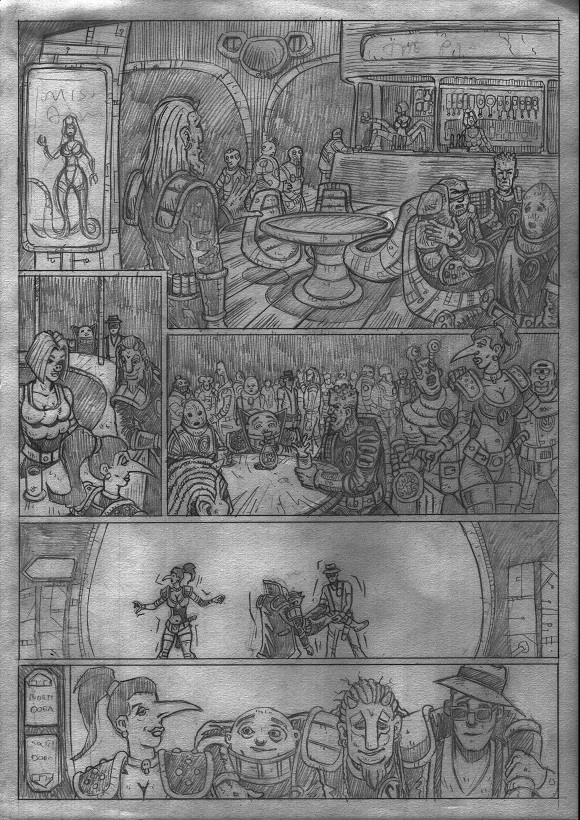 Above: Finished pencils for page seven. Note: Middenface Mcnulty, Evans the fist and Spud Murphy make an apperance in panels one and three. 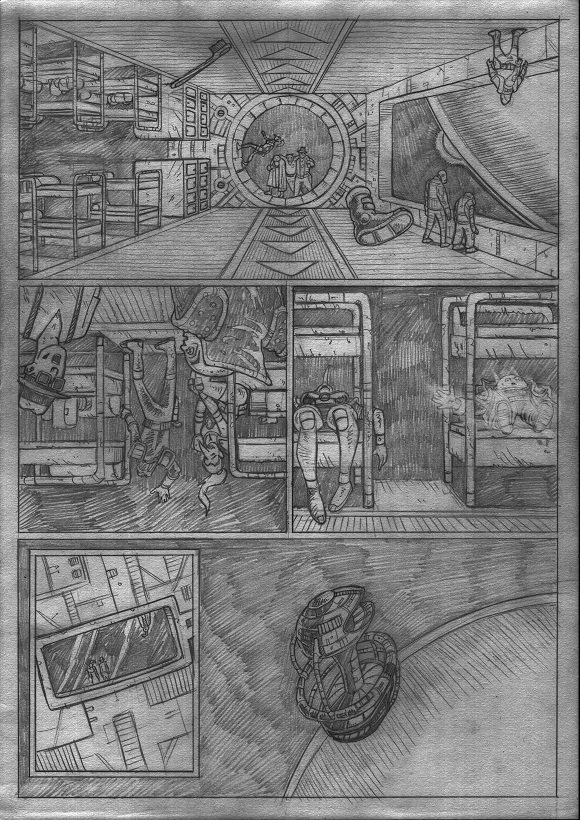 Above: Finished pencils for page eight.

Conclusion.
This was a tough story for me to illustrate for many reasons. Matts script challenged me to adapt my art style to portray the humour running throughout the story. At the time I would much rather of been drawing more serious action/dark humour scripts...now I'm happy to draw almost anything.  The page layouts and details required in each panel pushed me to come up with solutions (page six was tough) and my copies of SD/Agency files were never far away for reference when penciling the pages. 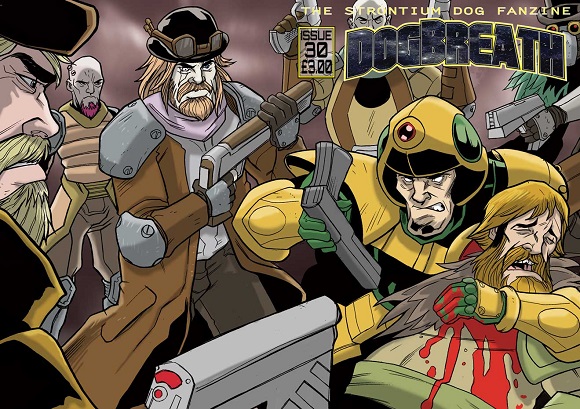 Above: Dogbreath #30 cover art by the brilliant Jim Lavery.

Where to buy:
Strontium Dog 'First Day' appears in Dogbreath #30 which can be bought online via the Futurequake online shop here http://www.futurequake.co.uk/shop.php

Other links:
If you have enjoyed reading this behind the scene break down here are a few more...
Judge Dredd 'Bad Crop'.
Judge Dredd 'Yet another rainy day.'
Strontium Dog 'Death by Dog.'
Comic Rock 'Silver Song'.
A look inside Shaman Kane Book 1.