COMIC ROCK 'SILVER SONG' A LOOK BEHIND THE SCENES. 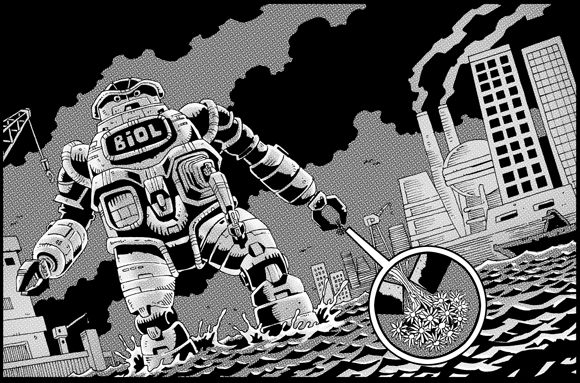 Above: Charlie the huge ships pilot for the great port of Northpool on his way to visit an old friend.

Introduction: I had been pestering Dave Evans otherwise known as 'Bolt 01' editor of the 2000AD fanzine 'Zarjaz' for any VC's, ABC Warriors or Rogue Trooper scripts for a while when without
warning he sent me 'Silver song' written by Matt Sharp. As soon as I saw that it was based on one of my Favourite 2000AD stories of all time 'Terra-Meks' written by Pat Mills, drawn by Dave Gibbons and published in 2000AD prog 98 to 101, I almost broke the keyboard in my haste to bag this script before some other lucky artist got it.

The Script: Matt Sharp gives us an insight into his ideas for Silver song.

OK, here goes... I think the original inspiration for Silver Song came from the slightly puzzling fact that football fans sometimes sing show tunes as part of a goal celebration, as 'being a football supporter' and 'enjoying musicals' are generally not the same thing at all, in my experience. Liverpool's traditional refrain of 'You'll Never Walk Alone' had, of course, been used by the inhabitants of Northpool (itself a very thinly disguised Liverpool) in one of my all time favourite 2000 AD stories, 'The Terra-Meks', which led me to recall a long held suspicion that the body inhabited by Mek-Quake in Nemesis Book III was in fact a reconditioned Charlie. I eventually figured out how one thing could have led to another. It got a little bit... grim.

I wasn't sure that Bolt and Richmond at Zarjaz would accept me killing off an established 2000 AD character (even one who hasn't appeared since the seventies), so I thought about it for a bit and then sent it in anyway. There was at one point an epilogue page eight, where the robot mechanic Socket-2-M3 is revealed to have rescued Charlie's brain and has promised to get his body back as soon as he can (the last panel is 'Hundreds of Years Later', with Charlie's brain still sitting on a dust covered shelf and Socket-2M3 still promising he'll get his body back 'any day now') but fortunately Bolt and Richmond were happy with the original version!

I was thrilled to get David's truly stunning artwork in my inbox (the frame of Charlie in the ocean of Europa, with Jupiter in the background, took my breath away, and JUST LOOK AT THAT LAST PANEL!) and don't forget Bolt 01's excellent lettering, considering the somewhat eccentric instructions I leave for the letterer (such as 'Singing Font', or 'Winding Down Mechanical Voice')

Thats great Matt. Thanks for taking the time to write the above.

Page layouts: As you might have seen with my previous posts page layouts are the first thing I create after reading the script. Time was short so I produced basic page layouts with text box placements. 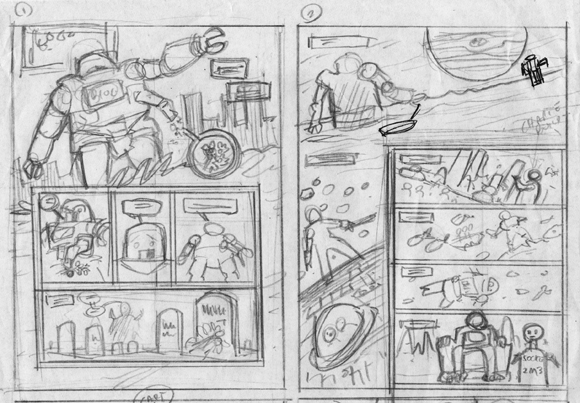 Above: Rough page layouts for pages 1 and 2. 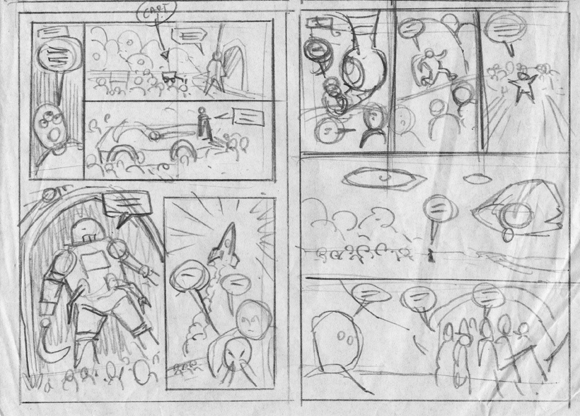 Above: Rough page layouts for pages 3 and 4.

Finished pencils: As usual I like to embelish my finished pencils. I had an interesting question on Face Book recently. I was asked why do I block the black areas when just puting an 'X' mark in the area to be filled would be quicker. My answer was that it helped me to ink quicker and make less mistakes. It also helps me to check the composition of the page. 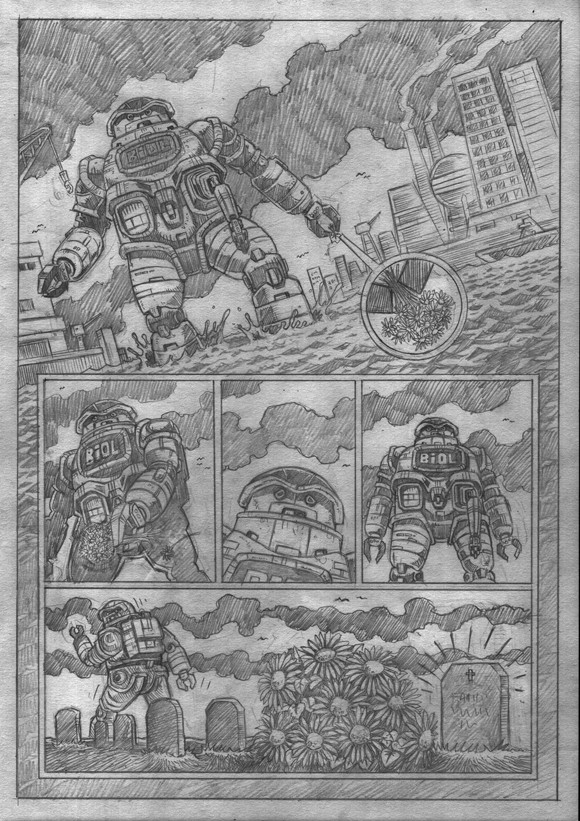 Above: Finished pencils for page one. The script asked for Charlie to be holding flowers in the first panel. As Charlie is probably taller than the Statue of Liberty I decided to put an extra panel in to zoom in on the flowers.  Otherwise the flowers would not be visible if everything was to scale. I also decided to draw Sun flowers as they are a fairly large plant. 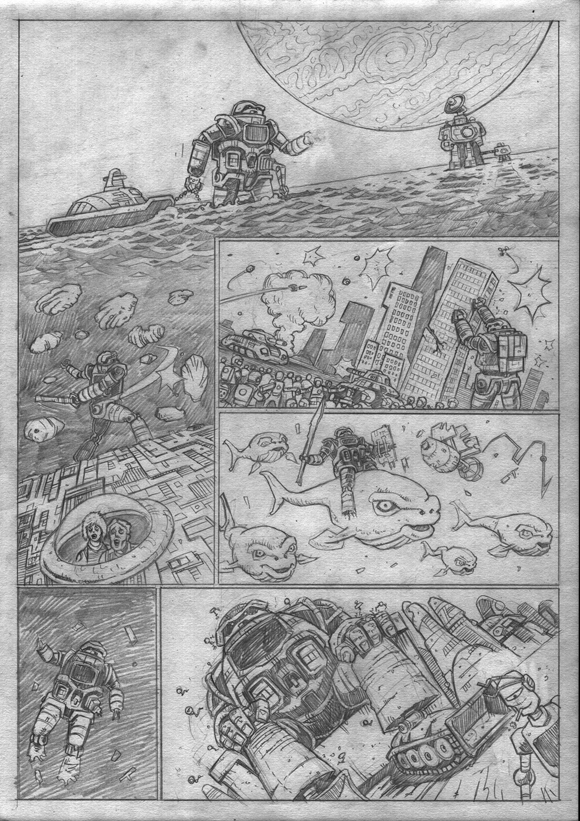 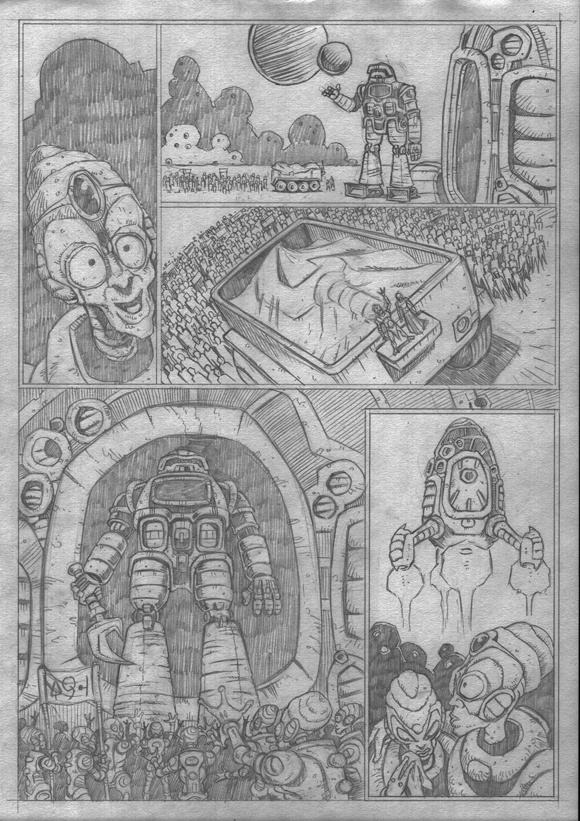 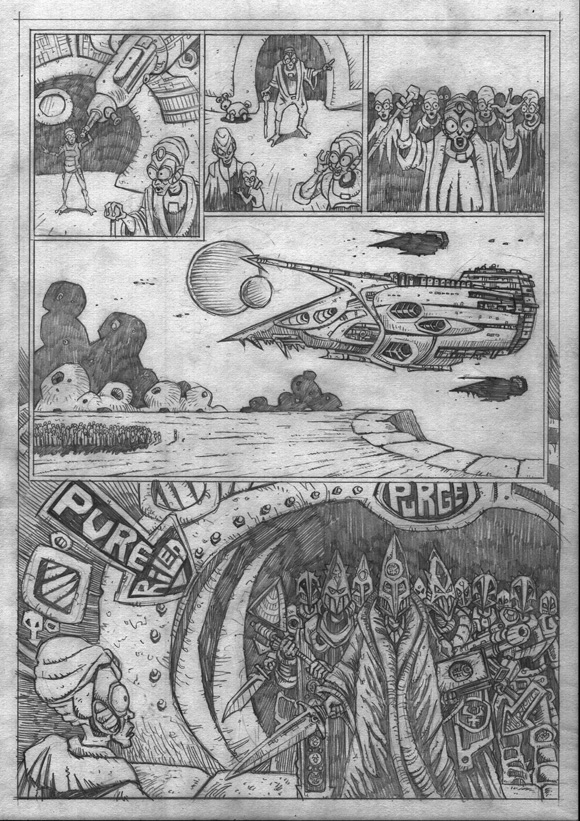 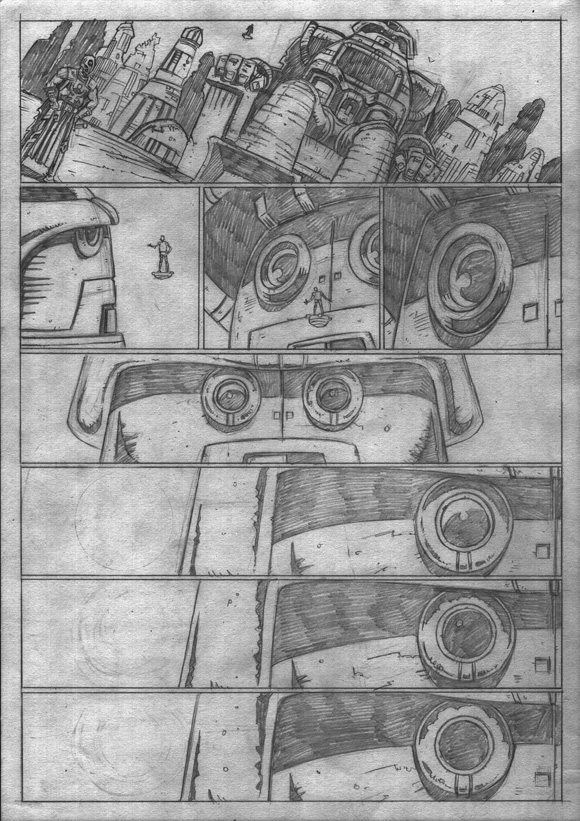 Above: Finished pencils for page Five. 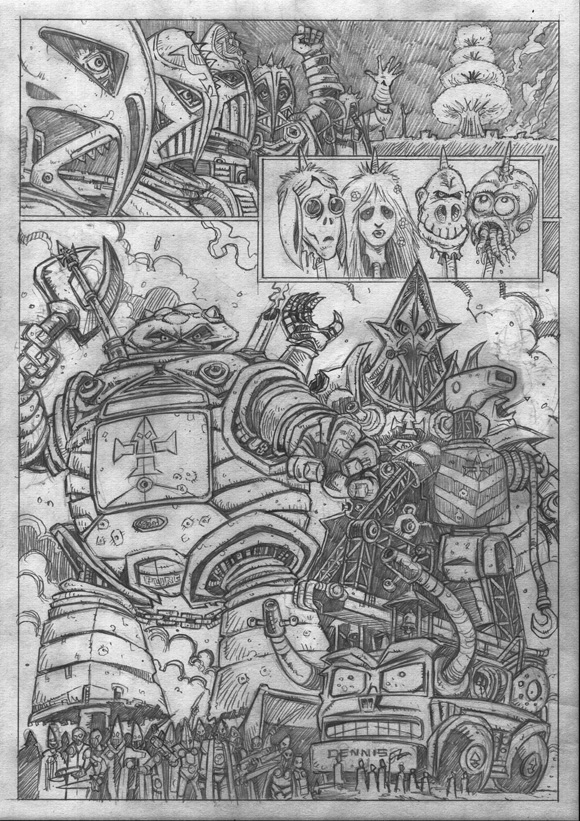 Above: Finished pencils for page Seven. Page 6 pencils were held back to protect the story.
I would also like to add that Dave Evans lettering on this strip was worth paying the £3 to buy this comic on its own. And the amount of work he put into lettering page Seven was above and beyond.

Where to buy:
Comic Rock 'Silver song' appears in Zarjaz #23 (see the cover below) which can be bought online via the Futurequake online shop here http://www.futurequake.co.uk/shop.php 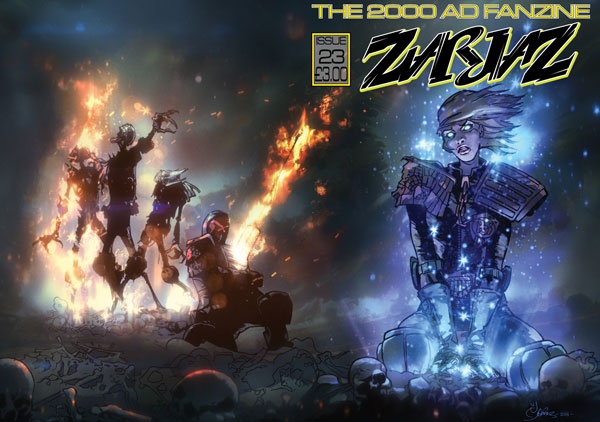